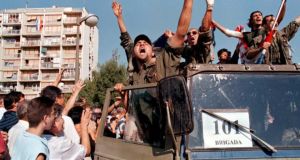 Not so long ago in eastern Europe, a region on the periphery of a country in crisis took up arms against the new government.

With the help of fighters, weapons, cash and a massive propaganda campaign from its big neighbour, the separatists declared independence and held an illegal referendum that supposedly backed unification with its powerful ally.

The world did not recognise the sovereignty of this crime-ridden, hyper-militarised breakaway region, but with the backing of its big ally it paralysed the rest of the country’s plans for economic development and integration with the West.

The neighbouring country, under an increasingly autocratic president, used its media to convince residents of the isolated province that the rest of the country was now run by murderous fascists intent on brutally suppressing them.

A large portion of the region’s population fled the chaos, and those who remained saw the economy collapse, criminality thrive and peace plans and ceasefires come and go.

With time came a kind of bleak stability; elections were held, a new currency was launched and politician-warlords held sway for as long as they enjoyed the favour of the big neighbour.

Western powers did the minimum necessary to try to prevent a wider, regional war, while hoping this remote corner of Europe would settle down, vanish from the headlines and allow them to focus on other business.

The West for years encouraged the divided country to get along with the separatists, to not antagonise their aggressive neighbour and to forget about trying to retake the lost territory because “there could be no military solution” to the dispute.

In the end, Croatia’s military solved the problem of Serb separatists in the Krajina region, who broke away in 1990-1991 as the country was escaping an ailing Yugoslavia dominated by Slobodan Milosevic in Belgrade.

As Croatia reflects on its victory, some in Ukraine now dream their own Operation Storm could one day crush an uprising, fomented and supported by Vladimir Putin’s Russia, which bears a striking resemblance to the Serb rebellion in Krajina.

“There are strong similarities with Ukraine, in the tacit encouragement and the overt support with weapons, and in the incendiary language that was used to fan the flames of rebellion in Krajina,” said Dr Jonathan Eyal, international director of the Royal United Services Institute in London.

“In 20 years of Ukrainian independence there was no serious secessionist movement in eastern Ukraine, just as there was no such movement in Krajina.” He also highlighted the key role played by outside forces and propaganda in fuelling both conflicts.

Croatia’s drive for independence was led by the right-wing party of Franjo Tudjman, who became president in 1990 on a staunchly nationalist programme that alienated the country’s Serbs and made them fear for their future.

Some of the symbols and rhetoric used by Tudjman’s followers echoed those of the fascist Ustase movement, which ruled Croatia during the second World War as allies of Nazi Germany.

In Belgrade, Milosevic and his supporters seized on rising alarm among Serbs to portray themselves as defenders of their ethnic kin across Yugoslavia, and state media told them in increasingly hysterical warnings they faced mortal danger from Croats who were portrayed as bloodthirsty heirs to the Ustase.

“In Tito’s time, any talk of national identity was immediately denounced as ‘fascism’. It was the same in Soviet times, when any anti-Soviets were labelled as ‘Nazis’. These props were in the cupboard and were dusted off and used again,” Eyal said of Russia’s portrayal of Ukraine’s new pro-western authorities as “fascist”.

When Tudjman took over Croatia, it faced an insurgency while in a state of economic meltdown and with armed forces that were weak, disorganised and riddled with enemy spies – all problems facing Ukraine.

The politics and conduct of Croatia’s radicals could be deplorable, but they were fierce fighters on the battlefield who, over time, became more disciplined and were incorporated into the military as it grew in size and ability.

As the Yugoslav war spread into Bosnia, the West lost patience with Milosevic and boosted support for Croatia’s military – allowing weapons to flow to its army despite an official embargo and sending former US military officers to train its senior soldiers.

The US and Croatian militaries play down the importance of the US training, but many analysts say Operation Storm – and Operation Flash that preceded it – bear the hallmarks of Nato-style planning.

Ukraine’s soldiers are already being trained by US, British and Canadian troops, to the fury of a Russia that resents any Nato presence in the region.

Many Ukrainians, including senior politicians, hope their military will one day be capable of doing what Croatia’s did 20 years ago, in an operation that reunited the country and set it on the road to EU and Nato membership.

At the moment it is hard to imagine. Ukraine’s leaders appear to lack Tudjman’s implacable will, and Russia will always be a far fiercer foe than Serbia on all fronts – diplomatically, economically and militarily.

“It will be the same here as it was there,” Parubiy said last week.

“We need time, for the international community to use sanctions to destroy the financial empire that Putin has built and for us to prepare our army and wait for that morning, when we begin our own Operations Flash and Storm.”