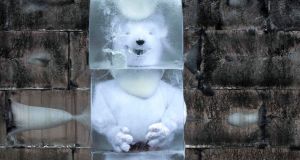 A polar bear replica displayed by Greenpeace activists inside a block of ice at Paulista avenue in Sao Paulo this month. Photograph: Rodrigo Paiva/Reuters

A Briton who has become the first of 30 Greenpeace activists arrested during a high-profile protest in the Arctic to have the criminal case against him dropped says he is proud of his actions.

Anthony Perrett, from Newport in South Wales, was one of 28 activists and two freelance journalists, including six Britons, who were arrested after Russian authorities boarded their ship, the Arctic Sunrise, during an anti-drilling demonstration in September.

After learning Russian authorities had dropped his case, the activist today said he was looking forward to getting home, even though he would not make it in time for Christmas.

“It’s time to go home, it’s time to get back to Wales, and I just got one big step closer,” he said.

“I took peaceful action to defend a fragile region under profound threat and instead I was seized by armed commandos at sea and spent two months in detention.”

But Mr Perrett said the campaign was “not over yet”.

“The Arctic is melting before our eyes and yet the oil companies are lining up to profit from its destruction,” he said.

“This is why I took action, to expose them and mobilise people to demand Arctic protection. I am proud of what I did.”

A Greenpeace spokesman said the migration service had told Mr Perrett he would be contacted on St Stephen’s Day to collect his visa, meaning he would not be home for Christmas.

The spokesman said it was unknown when the rest of the group, dubbed the ‘Arctic 30’, would be allowed to leave Russia.

Mr Perrett and the others were seized when the Greenpeace ship Arctic Sunrise was boarded after a peaceful protest at Gazprom’s drill platform in the Pechora Sea in September.

The spokesman said they need exit visas because they were charged and then bailed inside Russia after they were detained in international waters beyond Russia’s territorial waters.

The Russian Parliament approved an amnesty decree last week freeing defendants who have been charged with hooliganism.

The group had previously been accused of piracy, but the charge was later downgraded.

The Arctic 30 were initially detained in the Russian port city of Murmansk before being moved to St Petersburg and eventually bailed.

A global campaign to free the group, spearheaded by their families and Greenpeace, put pressure on the Russian government to release them.