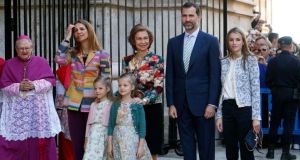 As he addressed a group of newly graduated judges yesterday, Prince Felipe called on them to carry out their duties with “prudence and strength”, adding that “justice guarantees the protection of the rights and freedoms of citizens”.

Spaniards could not help but scrutinise the prince’s words for hidden meaning given that the previous day, his sister, Princess Cristina, was named as a suspect in a corruption investigation. The younger of King Juan Carlos’s two daughters, she is the first immediate member of the royal family ever to be summoned to declare in court.

This investigation has already embroiled her husband, Iñaki Urdangarin, and the princess’s involvement drags the Spanish royals deeper into their worst crisis, casting doubt on their future as an institution. Prosecutors believe Mr Urdangarin and his business partner Diego Torres embezzled about €6 million in public funds from the Nóos charity, which the former used to head. Mr Urdangarin, a former professional handball player, denies any wrongdoing.

Princess Cristina, seventh in line to the throne, was a Nóos board member. The judge handling the case believes there is evidence she knew more about her husband’s activities than was previously apparent. Her court appearance is scheduled for April 27th. A series of scandals has undermined Spain’s political and economic leaders in recent years, but the Nóos affair is uncharted territory.

“This case has given the issue of corruption a qualitative turn,” said political scientist Fernando Vallespín. “The only institution that hadn’t been affected by corruption was the royal family – but now it has been.” A recent poll showed only 53 per cent of people believe Spain needs a monarchy, down from about 70 per cent five years ago and reflecting the erosion of the royals’ popularity last year.

However the Nóos scandal is not the royal family’s only problem. There is also the growing notion that King Juan Carlos has lost touch with his subjects.

In April 2012, it was revealed he had broken his hip while on an elephant-hunting holiday in Botswana. The fact he was enjoying a lavish, environmentally unfriendly trip just as the Spanish economy was sinking to a new nadir sparked an unprecedented backlash. The Spanish media, which has traditionally treated the king with utmost reverence, has been less kind lately, often prying into his private life.

El Mundo newspaper recently claimed he had money inherited from his father stashed away in a Swiss bank account.

“All the things that have led to his popularity plummeting probably wouldn’t have happened in a period of prosperity,” Paul Preston, a biographer of Juan Carlos, told The Irish Times . Mr Preston believes the economic crisis is magnifying the mistakes of Spain’s leaders.

“They [the monarchy] are now being tarred with the same brush as the political establishment.”

This is a far cry from the much-praised early years of Juan Carlos’s reign, when, instead of continuing the repressive right-wing regime of Francisco Franco after the dictator’s death in 1975, as many expected him to, he played a key role in ushering in democracy. That process, now known as la Transición , laid the foundations for Spain’s rapid late-20th century development. Juan Carlos’s decisive action in helping quash an attempted coup d’état in 1981 sealed his image as a courageous democrat. Yesterday, as the news of Princess Cristina’s court summons dominated the news agenda, foreign minister José Manuel García Margallo evoked that early period of the king’s reign.

“Anything that damages an institution which has been key in the Spanish transition and which is key for the prestige of Spain abroad causes great concern,” he said.

The possibility that Juan Carlos, now 75 and in frail health, could – or should – step aside has become an increasingly common subject of debate. In February, a senior Socialist politician, Pere Navarro, called for him to abdicate. Prince Felipe (45) has been groomed to become king and enjoys better poll figures than his father.

“This seems to be the end of a cycle that started with the democratic transition and is ending with the economic crisis,” said Mr Vallespín. He believes Spain’s institutions need a shot in the arm and that Juan Carlos’s abdication would be a positive move.

“We’re entering a new period and the political class, influenced by the media and by civil society, needs to introduce a new constitutional pact.”