Polarised debate marks the election campaign in a country divided 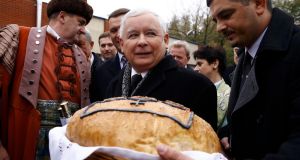 Last year Jakub Urbanik, a Polish university professor, asked his local registry office in Warsaw for a licence to get married in Spain. It was a standard procedure, confirming that the 40-year-old was not married and would not marry a blood relative. The problem was that his intended is a man.

The registry office refused him a licence, arguing that article 18 of the Polish constitution protects heterosexual marriage. Allowing Urbanik to marry a man in a different jurisdiction, they said, would breach that provision.

The Warsaw professor disagrees. Refusing him permission to marry in Spain infringes his human rights, he argues, not to mention the Spanish constitutional order and the right of his Spanish partner to marry him.

Already the Urbanik case has become a stone in a wider and complex cultural mosaic exposed ahead of Sunday’s poll.

A quarter of a century after its transition to democracy, Poland is a country divided. One Poland is urban, liberal economically prosperous, EU-friendly and outward-looking; the other is rural, traditional and conservative, unsure about the EU, doubtful of Poland’s big neighbours and faithful to the Catholic Church.

As rows over how to deal with its communists dwindle, an apparently conventional election campaign – with disputes over taxes, pensions and childcare – is coloured by an increasingly polarised debate between these two Polands.

Two years ago, this latest round of debate was sparked when the country’s bishops issued a letter warning their flock of a new danger facing Poland.

“Gender ideology”, they wrote, threatened Polish families and distorted young minds. The threat, one bishop claimed, was “worse than Nazism and Communism” – a remarkable assertion in a country blighted in the last century by the staggering crimes of Hitler and Stalin.

Siding with the Polish church is the party likely to win next Sunday’s poll: the national conservative Law and Justice party (PiS) of Jaroslaw Kaczynski.

“We are in the midst of a culture war and, at least for the time being, Poland’s conservatives seem to have the upper hand,” said Dr Jacek Kucharczyk of Warsaw’s IPA political think tank.

“Kaczynski and his party are political instruments in a contemporary Catholic counter-reformation project.”

This is a war that has many fronts, such as in July when ex-president Bronislaw Komorowski signed into law a Bill regulating in-vitro fertilisation.

Komorowski, a practising Catholic, defended his decision by saying he was “the president of the Polish people, not Polish consciences”.

But his decision sparked a debate – vicious even by Polish standards – in which the deeply political Polish episcopate implied Komorowski, by signing the Bill, had placed himself outside the church.

But their hard line triggered a remarkable backlash by high-profile Catholic priests. At a farewell Mass for Komorowski, the four concelebrants rebuked fellow “men of the Church” for using “harsh language” in misguided attempts to create a “sterile Poland”.

“We kept silent for too long,” said Msgr Aleksander Seniuk, in a widely-reported address, “not because we didn’t see or because we approved but because we were overcome by an overwhelming feeling of hopelessness.”

The other camp soon responded. In one of his first acts, Poland’s new PiS president Andrzej Duda vetoed a Bill passed by parliament to simplify gender reassignment procedures. This would have ended the current practice, whereby gender reassignment applicants must first sue their parents in Polish courts.

Duda was concerned that a pregnant woman would undergo a sex change and create “a formal possibility of a man giving birth”.

Another concern: that homosexuals would “undergo a legal sex correction without the anatomical change, leading to . . . a loophole in the regulations allowing only people of different sex to get married”.

In a series of interviews with Polish media, flanked by his Spanish partner, Charamsa attacked the latent homophobia and xenophobia in the Catholic Church in general and particularly in his homeland.

In Poland, priests and bishops condemned him as a “disturbed, immature and egotistic” man “who places sex above God and the Church’s teaching”. But prominent Polish psychologist Maria Rotkiel suggested Charamsa’s coming out could spark debate, “more peaceful, more factual” without impeding human dignity.

Looking to this weekend’s election, Urbanik sees time running out for this kind of debate. The law professor says he has been heartened by the level of public support for his marriage licence case, testament to how much more open and tolerant Poland has become in the last years. But he fears that could be reversed by a PiS victory on Sunday.

“PiS has been very smart in hiding its real face in this campaign,” said Prof Urbanik. “What worries me is that many people don’t connect the dots between how they vote and PiS promises to stretch democracy and create an authoritarian, Polish Hungary.”