Authorities identify 31 they say are linked to attacks, 18 of whom are seeking asylum 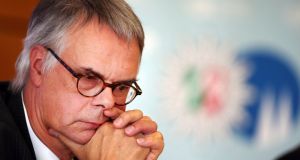 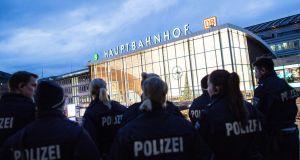 Police officers stand outside the main station in Cologne, Germany. After sexual assaults on women at New Year, there is an increased police presence at the main station. Photograph: Maja Hitij/EPA

The police chief of Cologne has been relieved of his duties following criticism of his handling of violent clashes in the city on New Year’s Eve, a state government source told Reuters.

The police chief Wolfgang Albers (60) was informed by the state interior minister Ralf Jaeger that he would be given early retirement, the source said.

Mr Jaeger, said the move was “necessary to restore public trust and the Cologne police’s ability to act, with a view to upcoming major events”. Cologne’s annual carnival is next month.

Mr Albers had faced mounting criticism for the police’s handling of the alleged New Year’s Eve attacks on women by small groups of men described as being of “Arab or North African origin”.

Police initially failed to mention the assaults around Cologne’s main station in their report the following morning, describing the new year festivities as “largely peaceful”.

Mr Albers acknowledged the mistake earlier this week but dismissed widespread criticism that officers were overwhelmed and reacted too slowly in protecting the women.

However, an internal police report widely published in German media indicated strongly that police were overwhelmed and described how women had to run through mobs of drunken men outside Cologne’s main train station.

However, he said after his removal that he understands Mr Jaeger’s decision.

In a statement, Mr Albers said that the events must be cleared up in detail and “the public debate surrounding me is liable to complicate and delay this work”.

Asylum seekers were among those involved in the violence the German interior ministry said.

Ministry spokesman Tobias Plate told a news conference federal police had identified 31 people by name who played a role in the violence, 18 of whom were in the process of seeking asylum in Germany.

Mr Plate said the vast majority of the 32 criminal acts documented by federal police on the night were tied to theft and bodily injury.

Three were related to sexual assaults, although police had no names tied to these acts.

He said of the 31 people questioned, nine had been Algerian, eight Moroccan, five Iranian, and four Syrian.

Two German citizens, an Iraqi, a Serb and a US citizen were also among those seen to have committed crimes during the night.