Claim of media cover-up on Cologne sex attacks is nonsense 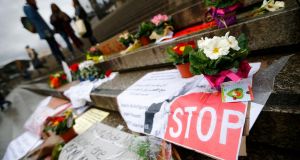 Flowers and posters are placed in the square between the city cathedral and the railway station in Cologne, Germany, January 11th, 2016, where the vast majority of dozens of New Year Eve assaults on women took place. Some of the messages read “Sexual harassment against women will be NOT tolerated”. Photograph: Wolfgang Rattay/Reuters 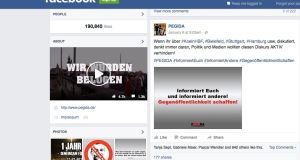 Leading the claims of a media conspiracy of silence is the far-right Pegida group. In a Facebook post from January 6th it said: “When you discuss (the Cologne/Bielefeld/Stuttgart/Hamburg attacks) always remember: politics and media want to actively hinder this discourse. 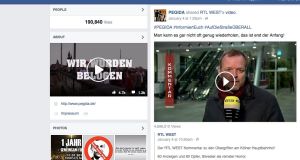 Pegida’s Facebook page linked directly to a report from RTL television commentary, headlined: “It was pure horror.” Thereby relying on a mainstream media outlet for its evidence. 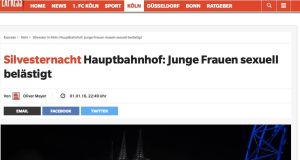 Cologne’s Express newspaper headlined its report from 10:49pm on January 1st: “New Year’s Eve Central Station: Young Women Sexually Harrassed.” This is evidence the Express did not ignore or cover up the incidents.

The mainstream media engaged in an outrageous cover-up of the attacks against women by Arab-speaking men on New Year’s Eve in Cologne.

So it is alleged. In the first days of January, the claim spread through social media as quickly as details of the shocking attacks in the western German city.

Yes, there were problems with the mainstream media coverage. Some of the outlets had a skeleton staff over the new year, others were preoccupied with the Islamic State (Isis) terror warnings in Munich that closed two train stations.

Some news organisations, such as ZDF public television, later apologised for being slow to catch on. Others, such as Cologne-based public broadcaster WDR, has launched an inquiry into its coverage, which began on January 2nd.

But the claim of a media cover-up - of an ideological conspiracy of silence to protect asylum-seeker perpetrators and ignore the humiliation of German women - is nonsense.

The allegation was launched and pushed in part by the far-right Pegida group and is a classic case of social media “truthiness”: something that according to certain interested parties must be true - and therefore is true - with no need to check the facts.

Hours after the first claims surfaced on Facebook on January 1st, Cologne’s local newspapers contacted police. After receiving confirmation that there were dozens of complaints, they ran several stories online and in their January 2nd editions.

Its competitor newspaper, the Rundschau, also carried a report on January 1st: “Women harassed at central station. A near mass panic at the cathedral.”

The Rundschau’s long piece detailed the chaos of the night and interviewed a 17-year-old woman who said she and her friends were surrounded by at least 30 men near the central station, who robbed their bags and valuables before groping them.

“I had fingers at every orifice,” said the young woman.

By January 2nd, most media organisations in the state had caught up and began reporting on the attacks - including allegations that many perpetrators were of north African origin - to the population of North Rhine-Westphalia, population 17.84 million, and beyond.

Facebook played a key role in spreading many of the claims about the Cologne attacks, true and false, in particular the “media cover-up claims”.

For instance, many media organisations were criticised for not posting a video claiming to show a woman being attacked by Arab men.

“Video of attacks in Cologne that the press wants to keep from us....”

When Cologne’s Express was asked by an angry reader why it hadn’t posted the video, it responded: because the video came from Tahrir Square in Cairo, two and a half years ago.

Another fake exposed by Express was an apparent letter from a Cologne clinic, slapping a gag order on a woman it had treated after the attacks, apparently to stop her talking about her ordeal or the perpetrators’ identities.

Leading the claims of a media conspiracy of silence is the far-right Pegida group. In a Facebook post from January 6th, it said: “When you discuss (the Cologne/Bielefeld/Stuttgart/Hamburg attacks) always remember: politics and media want to actively hinder this discourse.

The problem with this claim is that, in previous days, Pegida appears to have first learned of the attacks from the mainstream media and, in daily posts, cited liberally from Germany’s mainstream media reports for the latest updates on the Cologne attacks investigation.

On January 4th, at 7.11am, it liked a post by a user claiming that “those who speak the truth continually are demonised in this country, those who lie to us constantly and have caused this horror live from our tax money - and very well. Thank you Pegida that you’re there”.

Below this rant about lies and speaking the truth was a link to an article from Cologne’s Express newspaper: “The start was a group of around 1,000 men.”

A few hours later again it linked directly to a report from RTL television commentary, headlined: “It was pure horror.”

Two days later, on January 6th, Pegida warned its followers about the ongoing media conspiracy of silence. On January 9th, that claim didn’t stop it from noting that “slowly more and more truth is coming to light...” and linking to a report from the Westfalen Blatt newspaper.

There are many legitimate concerns people have about the attacks on women in Cologne on New Year’s Eve, and violence committed against women by asylum seekers.

But the idea of “media cover-up” is an idea pushed by Pegida, among others: far-right groups who chant “Lügenprese” - lying press - while feeding on media coverage of the attacks.

The question for Pegida - and those who uncritically swallow its claims - is: when did the media cover-up of the Cologne attacks begin, and how long did it last?