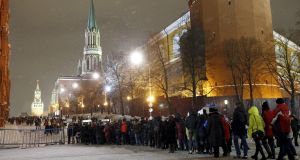 People stand in line for police checks at the entrance to the Red Square, Moscow. The Red Square will be closed to visitors on New Year’s Eve. Photograph: Maxim Shipenkov/EPA 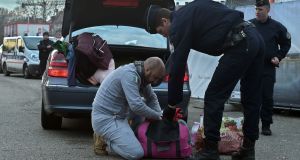 French police controls a car as they search for fireworks at the border between France and Germany in the eastern French city of Strasbourg. Photograph: Patrick Hertzog/AFP/Getty Images

Authorities in Brussels have called off the city’s traditional New Year’s Eve fireworks display, citing fears of a militant attack, while a light show and firework display in Paris have been cancelled to keep crowds down.

Moscow’s Red Square, where thousands of people usually gather to ring in the new year, will be closed on New Year’s Eve, while in London, thousands of police will be on duty with an increased number of firearms officers.

The Puerta del Sol in central Madrid, where thousands gather to hear the bells ring in the new year, will be under high police surveillance, according to El Pais. The number of people admitted to the square will be capped at 25,000 with 600 police on duty in the area.

Square on Thursday for the New Year’s Eve dropping of the ball, a tradition begun in 1907 and broken only during wartime blackouts.

In the aftermath of Islamist-inspired attacks in San Bernardino, California, and Paris, the city will draw on its new Critical Response Command counterterrorism unit, which includes more heavily armed officers, to patrol Times Square.

The unit, trained to detect and respond to attack plots, was commissioned days before the Macy’s Thanksgiving Day Parade. Officers communicating with smart phones and loud speakers will be empowered to shut down the event at any time and evacuate the area, Police Commissioner William Bratton said, adding that there were no known credible threats against New York City.

Backpacks and large bags have been barred from the area. All other bags will be searched and metal detectors will be used to screen everyone in the crowd. Bomb-sniffing dogs and radiation detectors will also be employed during the event.

On Tuesday, federal prosecutors said two people suspected of plotting an attack in Brussels on New Year’s Eve had been arrested during house searches in different parts of the country.

“Together with the interior minister, we’ve decided to not have the celebrations on Thursday evening,” Brussels mayor Yvan Mayeur told the state broadcaster RTBF.

The two people arrested, who are likely to appear in court on Thursday, belong to the Kamikaze Riders, a motorbike club whose members are mostly of North African origin and whose bike stunts can be seen in various online videos.

Belgium has been at the heart of investigations into attacks in Paris on November 13th in which 130 people were killed.

Two of the Paris suicide bombers, Brahim Abdeslam and Bilal Hadfi, had been living in Belgium. On Wednesday, a source close to the French investigation confirmed a report that said at least one man was suspected of having coordinated the attacks by mobile phone from Belgium as they were being carried out.

Brussels last cancelled its New Year fireworks in 2007, when it was also on high alert after a plan was foiled to free Tunisian Nizar Trabelsi, convicted of plotting to blow up a military base.

Hotels and restaurants in Paris are still suffering in the wake of last month’s attacks with bookings for New Year celebrations down 30-40 per cent, a hotel federation said.

“Bookings for the year-end weekend are down 30-40 percent,” said Evelyne Maes, head of the UMIH-Paris-Ile de France hotel federation. Authorities in Paris, with an eye on security following the November attacks, are shortening a New Year video light show at the Arc de Triomphe at midnight on Thursday and cancelling a firework display to keep crowds down.

France, which has been struggling to revive its economy, is the most-visited country in the world, with Paris hosting 32.2 million visitors last year.

Meanwhile US authorities are monitoring investigations overseas of alleged plots by Islamic State operatives or sympathizers to launch attacks over the New Year’s holiday period.

US officials noted arrests overseas by authorities in Turkey, Belgium and Indonesia in connection with alleged plots linked to Islamic State.