Amsterdam Letter: admission about the late Johannes Gijsen has led to anger as well as relief among victims 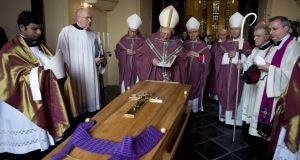 It was probably the worst-kept secret behind the closed doors of the Dutch Catholic Church: that the late Johannes Gijsen, the conservative bishop chosen to roll back the reforms of the 1960s, was a child molester – as he is now finally being described.

It is precisely because it was such a badly kept secret that last weekend’s brief and grudging admission by the church authorities that allegations against Gijsen were “well-founded” has caused as much anger as relief among victims of clerical sex abuse in the Netherlands.

As recently as 2011, Gijsen, formerly bishop of Roermond in the Catholic south of the country, not only denied one of the main accusations against him – that he had forced a young boy under his control to perform oral sex – but denied ever having met his victim.

There were many who undoubtedly knew he was lying. But his accusers say that, even in retirement, he wielded such a malign power that no one in the church was willing to stand up to him – right up until the day he died last year aged 80.


Rooting out ‘evil’
Supporters of Pope Francis may claim that the path to this belated “outing” was paved by the pontiff’s admission last Friday that the church must do more to root out “all the evil” done by criminal clergy. But the victims’ retort is blunt: Gijsen went to his grave unpunished, unashamed and utterly unrepentant.

The bishop did what he liked, as he liked, to whomever he liked (as long as they were powerless), and none of his fellow clergy had the moral fibre to stop him.

That, for many years, has been the appalling proposition of victims’ organisation Mea Culpa, and it was pooh-poohed to the end by the Catholic hierarchy.

With understandable scepticism, Mea Culpa says all that has changed today is that the church has fessed up because it is safe to do so – the bishop is dead, and a change of culture at the top means now is the best possible time to repent.

Two cardinals – Keith O’Brien in Edinburgh and Hans Hermann Groër in Vienna – quit in disgrace amid accusations of misconduct with seminarians.

A Belgian bishop, Roger Vangheluwe, stepped down after admitting to molesting his nephew, while the Vatican has been investigating allegations against Archbishop Josef Wesolowski, its nuncio to the Dominican Republic.

Each country, of course, becomes caught up in the distressing details of its own revelations. But the story of clerical sex abuse in the Netherlands has been quite remarkable for such a small place, and puts Gijsen in the context of his times.

In 2012, the 1,100-page first report of the Deetman commission – chaired by former education minister Wim Deetman – revealed that 800 Catholic priests and monks abused as many as 20,000 children in their care between 1945 and 1985.

It said the abuse took place in boarding schools, children’s homes and orphanages, but was not acknowledged by the church authorities because of their “culture of silence” and determination “not to hang out their dirty washing”.


Bedridden boys
Not all of the abuse was sexual. Deetman uncovered one “cluster” where a Catholic brother gave fatal overdoses of medication to at least 37 disabled and bedridden young boys in a church-run residential home between 1952 and 1954.

A second Deetman report last year focused on the incidence of abuse against girls, which it said was much higher than investigators’ worst fears – “probably in the tens of thousands”, and so high that it was unlikely to be established more accurately.

In cases of sexual abuse, Deetman said, the perpetrators were almost always male clerics, often friends of their victims’ families.

In cases of violence that did not involve sexual abuse, the perpetrators were predominantly nuns working in positions of trust, such as teachers, nurses or carers.

It is a terrible litany. Faithful Catholics have been left confused and without leadership. Half-hearted apologies have made matters worse – so much so that two-thirds of Dutch Catholic churches are expected to be closed by 2025.