Euro zone leaders praise Ireland, but give most credit to its own ideals 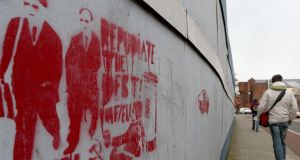 Euro zone authorities have been quick to characterise the Irish exit story as a victory for the euro zone response to the crisis. Photograph: Brian Lawless/PA Wire

Ireland’s decision to return to full private market funding without the help of a precautionary credit line dominated debate in Brussels this week, as Ireland prepared to become the first euro zone country to exit its bailout programme on time and on target.

More than five years after the onset of the euro zone crisis, it was a highly significant moment for European authorities.

Criticism of the euro zone’s policy of fiscal consolidation has intensified over the last year, as murmurs of discontent about austerity broke out into fully-fledged assaults on the intellectual foundations of the policy, while governments across the Continent struggled with the political reality of implementing stringent cuts prescribed by Brussels. Brussels needed a good story. Ireland delivered.

While careful to give Ireland most of the credit for the successful implementation of the programme last week, euro zone authorities were quick to characterise the Irish exit story as a victory for the euro zone response to the crisis. Ireland was “an example of how a programme can work and should work”, said euro group president Jeroen Dijsselbloem.

While praising Ireland’s commitment to the terms of the programme, EU commissioner Olli Rehn couldn’t help noting that a number of concessions from Europe, including the decision to reduce the interest rates on loans and extending loan maturities, had benefited Ireland’s return to markets.

Ireland, the sub-text suggested, was a shining example of the European ideal of partnership and mutual support in action. It was also an example of how adherence to a rescue programme can yield results – a not-so subtle message to other bailout countries struggling to implement the terms of their programmes.

As the dust settles on the Irish bailout decision, and Spain also prepares to complete its €40 billion bank rescue programme, attention is turning to the other programme countries in the euro zone. Ireland’s decision to exit without a precautionary credit line immediately prompted questions about the exit strategy for other countries, Portugal in particular, which is scheduled to be the next country to exit.

However, for Portugal, the question is not so much whether the country will need a precautionary credit line when its €78 billion rescue package expires next June, but whether it will need more funds. Portugal has been struggling to implement the terms of its bailout programme. Political dissent over the scale of the budgetary cuts envisaged by the programme culminated in a political crisis this summer when finance minister Vitor Gaspar resigned.

While the government survived, the tension unsettled bond markets, with government bonds weakening, and yields rising to close to 8 per cent. Since then 10-year bond yields have settled around the 6 per cent mark, compared with the 3.5 per cent yield commanded by Irish debt.

While the country passed its 2014 budget last month, out- lining cuts of €3.2 billion, there are still concerns that its consti- tutional court could once again reject austerity measures.

The Portuguese government denied rumours of a second bailout package last month, but concern about debt stability and anaemic growth levels worry markets. Ratings agency Fitch said this week that it has always assumed Portugal will need further official support when its programme ends in June, though it believes an enhanced-conditions credit line is most likely.

Greece’s bailout programme, which expires at the end of next year, is also in difficulty, with expectation of a significant shortfall. Discussions between the troika and Athens are in turmoil, with the euro group insisting on a number of fiscal consolidation measures in order to meet a €2 billion gap in its 2014 budget. With a year to run in the programme, a number of hurdles must be passed before discussion of a post-programme strategy or third bailout will begin, although signs that investors are beginning to buy into Greek debt have boosted its recovery story somewhat.

The continuing troubles for Portugal and Greece may be one reason why the Irish authorities opted to exit the bailout without a credit line. By engaging in a further programme with the ESM, Ireland ran the risk of becoming linked to Portugal’s exit strategy, having already been paired with Portugal on the decision to extend loan maturities.

With bond markets already distinguishing between Ireland and other bailout countries, as reflected in the countries’ diverging yield patterns, Ireland may have felt it was wise to cut all ties with fellow euro zone programme countries, whatever the risks.