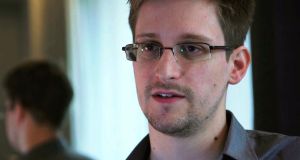 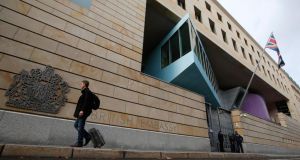 A pedestrian walks in front of the British embassy in Berlin today. Photograph: Fabrizio Bensch/Reuters

“At the instigation of Foreign Minister (Guido) Westerwelle, the British ambassador was asked to come for a talk at the Foreign Ministry,” the ministry said in a statement. “The director of the European department asked for an explanation of current reports in British media and indicated that tapping communications from a diplomatic mission would be a violation of international law.”

The move comes after documents leaked by former US National Security Agency contractor Edward Snowden show Britain’s surveillance agency is operating a network of “electronic spy posts” from within a stone’s throw of the Bundestag and German chancellor’s office.

The documents, in conjunction with aerial photographs and information about past spying activities in Germany, suggest that Britain is operating its own covert listening station close to the German parliament, and Chancellor Angela Merkel’s offices in the Chancellery, using hi-tech equipment housed on the embassy roof, according to the Independent newspaper in Britain.

The spying operation, conducted by GCHQ at diplomatic buildings around the world to intercept data in host nations, is being carried out together with the United States and other key partners.

Spy agencies across Western Europe are working together on mass surveillance of internet and phone traffic comparable to programs run by their US counterpart and denounced by European governments, the Guardian newspaper reported last weekend.

There has been particular anger in Germany, a close ally of the United States, over allegations that the NSA monitored Dr Merkel’s mobile phone.

In the video, the two men are seen seated at a table, talking and laughing, before standing up to sign a letter addressed to the German government and federal public prosecutor.

In the open letter, Mr Snowden said his revelations had helped to “address formerly concealed abuses of the public trust”.

Complaining that Washington continued to “treat dissent as defection” and speaking of a “sustained campaign of persecution” that he said had forced him into exile in Russia, Snowden wrote that “speaking the truth is not a crime”.

He added: “I am confident that with the support of the international community, the government of the United States will abandon this harmful behaviour,” read his letter to Dr Merkel, the Bundestag and German federal prosecutors.

Snowden’s leaks about the targets and methods of the National Security Agency (NSA), from alleged mass scanning of emails to the tapping of world leaders’ phones - including Merkel’s - have infuriated US allies and placed Washington on the defensive.

US authorities want Mr Snowden handed over to face espionage charges for illegally disclosing government secrets. The head of Britain’s MI5 Security Service has said the material he divulged to journalists was a gift to terrorists.

The 30-year-old ex-CIA employee and NSA contractor, who fled to Moscow via Hong Kong earlier this year and was given political asylum by Russian president Vladimir Putin, said he had been forced into exile for acting according to his “moral duty”.

Germany’s parliament wants to talk to him about the NSA’s secret monitoring of Dr Merkel’s phone and the communications of a host of politicians and business people, according to reports. But visiting Germany would pose grave diplomatic problems for Dr Merkel and endanger Mr Snowden’s asylum status back in Moscow.