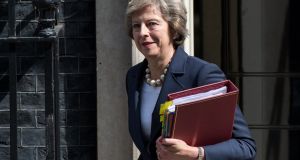 Britain is to relinquish its six-month presidency of the European Union which had been scheduled to begin in July next year following its decision to leave the European Union, with Belgium most likely to assume the role.

British Prime Minister Theresa May informed European Council president Donald Tusk of the decision in a phonecall late on Tuesday. The move had been widely expected, but former Prime Minister David Cameron informed his colleagues at an EU summit on June 28th that it would fall to his successor to decide whether the presidency would go ahead.

The six-month rotating presidencies are a cornerstone of EU policy-making, allowing member states the opportunity to host EU meetings and set the policy agenda for a six month period.

Britain had been due to assume the presidency in July 2017, but the vote to leave the European Union had thrown Britain’s scheduled presidency into doubt.

While it is understood that Estonia, which had been due to assume the presidency in January 2018, had been keen to move forward its stint by six months, other member states who are scheduled to assume the role in 2018 and 2019 expressed concern that they would have insufficient time to prepare.

EU ambassadors meeting in Brussels today are considering the Belgian offer, which must be agreed by a qualified majority of members.

Another possibility mooted was that Malta, which takes over the rotating presidency in January would extend its chairmanship by three months with Estonia beginning three months earlier than planned.

The prospect of Belgium holding the EU presidency chair while Britain’s negotiations to exit from the European Union may not be welcomed in London where Belgium is perceived to be one of the strongest proponents of European integration and likely to take a tough stance against Britain in the forthcoming negotiations.

The reconfigured presidency calendar will mean that the EU’s newest member state, Croatia, which joined the European Union in 2013, will take up Belgium’s scheduled presidency in 2024.

It is understood that temporary staff that had been expected to join the British Permanent Representation in Brussels next year had been told that their services would not be needed.

As the ramifications of the British referendum result continues, British Prime Minister Theresa May flies to Britain today for talks with German chancellor Angela Merkel, her first meeting with the German leader since her appointment as prime minister last week.

The former Home Secretary is expected to tell the German chancellor over dinner that Britain needs more time before it activates Article 50, the legal mechanism which allows a member state to leave the European Union. Ms May will then travel to Paris for meetings with French president Francois Hollande on Thursday.

Foreign secretary Boris Johnson told EU foreign ministers that Britain would not turn his back on Europe despite its vote to leave the European Union at a meeting of foreign affairs ministers in Brussels on Monday.

The government must “give effect to the will of the people and leave the European Union,” he told journalists. “But that in no sense means that we are leaving Europe. We are not going to be in any way abandoning our leading role in European co-operation and participation of all kinds.”

The new foreign secretary, who addressed the meeting in French, met a number of EU foreign ministers bilaterally, including Minister for Foreign Affairs Charlie Flanagan.