British Prime Minister David Cameron speaking outside his Number 10 Downing Street residence, has announced he will hold a referendum on Britain’s membership of the European Union on June 23rd. Video: REUTERS 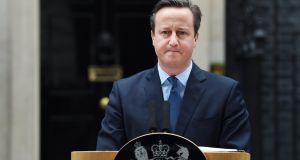 British prime minister David Cameron has announced he will hold a referendum on Britain’s membership of the European Union on June 23rd.

“I will go to parliament and propose that the British people decide our future in Europe through an in-out referendum on Europe on Thursday the 23rd of June,” he said.

The prime minister hailed the landmark deal which gave Britain “special status” in the European Union and pledged to put his “heart and soul” into the campaign to stay in the EU.

At a summit that ran into overtime, EU leaders agreed unanimously on a package of measures aimed at keeping Britain in the 28-nation bloc to avoid a potentially disastrous divorce.

Their legally binding decision granted Britain an explicit exemption from the founding goal of “ever closer union”, offered concessions on the welfare rights of migrant workers and safeguards for the City of London financial centre.

The British prime minister said he had achieved all his main negotiating aims and would recommend the agreement to his cabinet on Saturday, firing the starting gun on a fierce referendum campaign on Britain’s future membership of the bloc.

“I believe we are stronger, safer and better off inside a reformed European Union,” he told a news conference.

“And that is why I will be campaigning with all my heart and soul to persuade the British people to remain in the reformed European union that we have secured today.”

The eurosceptic “Vote Leave” campaign was quick to dismiss what it called “Cameron’s hollow deal” as bad for Britain.

Mr Cameron acknowledged that one of his closest political allies, Justice Secretary Michael Gove, would campaign to leave the EU, saying he was disappointed but not surprised.

He suggested other Conservatives may also join the “out” camp.

After two days of intense wrangling in Brussels, EU leaders determined to try to keep Britain in the union resolved outstanding disputes over migrant workers’ welfare rights and relations between London and the euro zone.

“So now the deal is done and its up to the British people to decide,” said European Commission President Jean-Claude Juncker – the man Mr Cameron tried furiously to block for the top EU executive job, but who played a key role in crafting the deal.

German Chancellor Angela Merkel, one of Britain’s strongest allies in Europe, said: “We believe that with this we have given David Cameron a package with which he can campaign in Britain for Britain to stay in the European Union.

The agreement delivered victory to Mr Cameron on several of the key demands on which he chose to fight for what he called “a new settlement” with Europe.

As the summit stretched into Friday night, Mr Cameron was still facing strong opposition from central and eastern European leaders on the issue of reducing welfare benefits for citizens of other EU countries living in Britain.

In the end, a compromise was reached, allowing Britain to impose an “emergency brake” on such payments for a period of seven years.

The British prime minister had already conceded that the reduction of in-work benefit payments for EU migrants would not apply to those already living in the country.

But Britain wanted to immediately start indexing the level of child benefits for children living overseas to take account of different standards of living. Under a compromise, the indexation of child benefits, which any member-state may adopt, will apply to all from 2020.

“This puts an end to the idea that people can come to our country and get something for nothing,” Mr Cameron said.

The Government will invoke an EU Treaty protocol in an attempt to exempt Irish citizens working in Britain from the reduction in welfare payments to EU migrants on the basis of the Common Travel Area between the UK and Ireland.

The Common Travel Area is recognised in Protocol 20 of the EU Treaty and Mr Cameron has already suggested that it could allow Britain to exempt Irish citizens from the welfare benefit changes.

The Government will argue that the Common Travel Area is an expression of the web of arrangements between Britain and Ireland on everything from social welfare to voting, which reflect the unique relationship between the two countries.

Speaking just after midnight in Brussels, Taoiseach Enda Kenny welcomed the fact that the indexation of child benefits would be applicable to all countries.

He said that while the issue of reducing child benefit payments had been part of the programme for Government it would be up to the next government to decide whether to implement the child benefit indexation option.

He said that no Irish person living in Britain would be affected by the deal and expressed confidence that the unique Irish connection with Britain would be acknowledged. “We’re happy that Britain fully understands that,” he said.