Boycott at ‘Croatia’s Auschwitz’ over fears of far-right revival 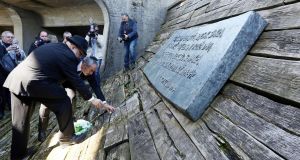 Rabbi of the Jewish community in Croatia, Luciano Mose Prelevic (left) and Ognjen Kraus, the co-ordinator of the country’s Jewish communities, lay a wreath at at the site of the Jasenovac concentration camp on April 15th. Photograph: AFP/Getty Images

When Croatian officials gather on Friday at the site of the Jasenovac concentration camp, where the country’s 1940s fascist regime slaughtered tens of thousands of Jews and Serbs, those communities’ leaders will not be there.

They are boycotting the commemoration in protest at resurgent nationalism in Croatia, and its government’s alleged desire to whitewash a bloody past.

“It is an avalanche that has been rolling for over a year,” Ognjen Kraus, the co-ordinator of the country’s Jewish communities, said last Friday at an alternative ceremony at Jasenovac, which has been called “Croatia’s Auschwitz”.

It was attended by several hundred Jews, ethnic Serbs and members of other minorities in Croatia, where the right-wing Croatian Democratic Union (HDZ) returned to power in January at the head of a coalition government.

The HDZ’s first months back in office have confirmed many people’s fears about its attitude to the Ustashe movement, which butchered Jews, Serbs, Roma and political opponents when it ran Croatia as a Nazi puppet state from 1941 to 1945.

Within weeks of the coalition taking power, it was revealed that new culture minister Zlatko Hasanbegovic had hailed Ustashe “heroes” and “martyrs” in a far-right 1990s pamphlet, and posed for a photograph in an Ustashe cap.

Efraim Zuroff, director of eastern European affairs for Jewish human rights group the Simon Wiesenthal Centre, denounced Hasanbegovic’s “blind refusal to recognise the genocidal nature of the (Ustashe) regime, and his disdain for the brave Croatian anti-fascists who fought against it”.

Calling Hasanbegovic’s views on the Holocaust “absolutely unacceptable”, Zuroff urged Croatia to replace him with someone who would bring “honour and prestige to the post, rather than embarrass his country before the entire world”.

Hasanbegovic, who is still culture minister, denies having fascist sympathies and claims to be the victim of a smear campaign.

In March, parts of the crowd at a football match in eastern Croatia between the national team and Israel chanted the Ustashe slogan “Za dom – spremni!” (For the homeland – ready!), which Zuroff compares to the Nazi salute “Sieg Heil!”

The match — which was attended by new Croatian premier Tihomir Oreskovic — came a year after Croatia was ordered to play fixture behind closed doors due to racist chanting; at that game, in an empty stadium, television cameras picked up the image of a swastika that had been “painted” into the turf using chemicals.

Croatian president Kolinda Grabar-Kitarovic, who hails from the HDZ, said she condemned the incident “in the strongest possible terms” and vowed to “finally put a stop to such things”.

This time last year, she broke with tradition and declined to join officials from Croatia’s then leftist government at the Jasenovac commemoration, choosing instead to make a private visit separately.

A month later, she made a controversial trip to Bleiburg in Austria to pay her respects to Ustashe members and other people massacred there by communist guerrillas in 1945.

Bleiburg attracts ultra-nationalists who lionise the Ustashe as fighters for an independent Croatia — patriots whose defeat doomed Croats to decades in a communist Yugoslavia run from and ultimately dominated by Belgrade.

Strong views about the Yugoslav period, and what constitutes a “good” Croat, still divide the nation.

The Social Democrats emerged in 1990 from the crumbling communist party, in opposition to the new HDZ founded by Franjo Tudjman, a firebrand nationalist who would lead Croatia through a 1991-5 war against Yugoslav and Serb forces.

At a concert last summer in the HDZ-run town of Knin, to mark 20 years since Serb militia were defeated, nationalist singer Marko Perkovic Thompson played to a crowd that rang with Ustashe slogans and chants to “Kill a Serb!”

“For some time now, we’ve seen a clear intention to romanticise the crimes of the Ustashe and to deny the true number of its victims,” said Milorad Pupovac, the head of Croatia’s Serb National Council.

“We expect a response from the president – that’s why we organised alternative events at Jasenovac,” he added, referring to last Friday’s commemoration and another gathering planned for Sunday.

Pupovac, an academic and long-time liberal politician, complained that the museum at Jasenovac did not convey the scale and cruelty of Ustashe atrocities, and that Croatian schoolchildren were “no longer even aware of what happened there”.

Grabar-Kitarovic condemned Ustashe crimes during a visit to Israel last year, and she met Pupovac, Kraus and other minority leaders this month to discuss their concerns.

“We warned her that we signs of a resurgence of forces that promote intolerance in Croatia,” Pupovac told The Irish Times.

“But the EU should also react. If it is not ready to condemn signs of fascism and totalitarian ideology in a member state, then – as well as crises with refugees and the economy – it will face more and more problems of this kind.”