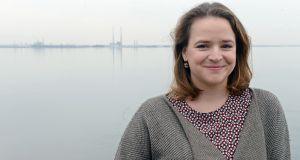 On a day in April 1992 Zlata Filipovic’s life transformed forever.

The siege on Sarajevo, which lasted 44 months and killed more than 10,000 civilians, began, stealing the hopes and dreams of the Bosnian schoolgirl.

Suddenly she was faced with the stark reality of living in a war zone.

“It feels like the day when the life I thought I would lead was taken away from me, taken away from everybody, and replaced with what for some people was three-and-a-half years of intense horrors and the misery of war,” she said.

“If you were lucky enough to survive it, you morphed into another life.”

The news notification on Thursday that Radovan Karadzic, the man responsible for the destruction of Filipovic’s life in Sarajevo, was going to jail appeared on her phone shortly after lunch with a quiet ping.

Staring at the words on the screen, Filipovic struggled to feel the relief she had dreamed of for so many years.

“Justice has been served to a certain extent. But sadly it’s too late for everything that’s happened. It’s not like some great, amazing closure for me or for any of us.

“It’s so far removed for the very concrete suffering and bloodshed and rape and terror and displacement that is so of the flesh and has hurt so many people.”

While Filipovic did experience at first-hand the violent siege Karadzic and his forces inflicted on her home city, she and her parents were eventually able to flee the conflict thanks to the young girl’s “scribbles”.

As a child, Filipovic kept a diary about “school, choir, loving the music of Michael Jackson and Madonna. I was a happy-go-lucky girl who thought war was something that happened to someone else”.

The then 11-year-old continued jotting down her thoughts when gunshots began ringing out in the hills surrounding Sarajevo in April 1992.

“My diary was no longer about school and music. It was how many bombs fell that day or did we have water or electricity or who did we know who was killed? The questions around why this was happening, why me?”

When a group of aid workers in Sarajevo heard about the diary they arranged to have it published as a pamphlet in Serbo-Croat.

The manuscript was subsequently discovered by French journalists and bought by a French publisher.

In December 1993, the publisher arranged for the family to be evacuated to France. Two years later they moved to Dublin.

At first Filipovic struggled to come to terms with the fact that her diary, which by 1995 had become an international bestseller, allowed her to leave Bosnia while her friends and family continued to suffer under the siege.

“Why did I have the chance to leave and go to school and be safe? We left because of my scribbles but it could have been anyone else writing them.

“There was no difference between me and my friend. She was just drawing while I was writing.

“I decided I could keep thinking like that or I could use the fact that I was out to speak for my friends and family and neighbours. I thought if I speak for them maybe the world will do something.”

More than two decades on, Filipovic still carries the emotional scars of the Bosnian conflict.

“You continue and pick up some sort of shape to what was so brutally snatched away from you and you keep going. It’s something that will always be a part of who I am. It’s the reason why I’m here.

She returns to Sarajevo at least once a year to visit friends and family but lives in Dublin, where she works as a film producer.

“There’s something nice about going back and being somebody’s daughter and niece and granddaughter, you come from a bigger history.”

Filipovic says Thursday’s verdict that Karadzic was guilty of genocide marks a historic moment in the fight for international justice, but asks whether the decision will enable Bosnians to finally move on and build a healthier society.

“Now we have it in black and white. We can’t speculate whether this guy is a criminal or not, it’s now been proven that he is. In that sense we have something.

“But it feels so removed from the intense suffering that so many families went through not so long ago.

“It’s always unfortunately going to be unsatisfactory, that’s the sad truth of things. I just wish it didn’t happen at all.”