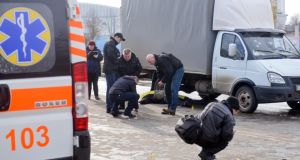 Police experts inspect the area close to a body following an explosion during a “Dignity March” in the Ukrainian city of Kharkiv. Photograph: Sergey Bobok/AFP/Getty Images

A deadly bomb blast in Ukraine’s second city and claims that Moscow is still sending heavy weapons to separatist insurgents in the country have undermined hopes that a ceasefire deal could be gaining traction after a bloody false start.

On Sunday, an explosion ripped through a rally in Kharkiv to mark a year since the toppling of Ukraine’s president, Viktor Yanukovich. The blast killed at least two people and injured 11.

“Today is memorial Sunday, but on this day terrorist scum revealed its predatory nature,” said Ukrainian president Petro Poroshenko. “This is a brazen attempt to expand the territory of terrorism.”

North of the conflict

Kharkiv is only about 30km from Ukraine’s border with Russia and has very close links with the country. Street clashes were common in the first half of last year between supporters and opponents of the revolution that ousted Mr Yanukovich. At the time, local leaders backed the then president and denounced the rallies.

As fighting escalated in Donetsk and Luhansk regions, occasional bomb and gun attacks have shaken Kharkiv, which is run by controversial mayor Gennady Kernes – a political chameleon and former ally of Mr Yanukovich.

Markian Lubkivskyi, an aide to the chief of Ukraine’s security service, said four suspects were quickly arrested. He claimed they had planned a series of attacks in Kharkiv with a Russian “Shmel” rocket launcher.

“They are Ukrainian citizens who underwent instruction and received weapons in the Russian Federation, in Belgorod,” Mr Lubkivskyi said, referring to a Russian city only about 40 km from Kharkiv.

Ukraine has also accused Russia of sending snipers to kill protesters in Kiev a year ago; of giving rebels the missile that shot down Malaysia Airlines Flight MH17 last July; and of arming the insurgents and secretly deploying Russian troops to help them. Moscow denies the claims.

Ukrainian military spokesman Andriy Lysenko said dozens of armoured vehicles entered the country from Russia over the weekend, apparently heading for the government-held port of Mariupol on the southern coast of Donetsk region.

On Saturday, a prisoner- swap and pledges by both sides to pull back heavy artillery raised hopes that an agreed ceasefire would belatedly be implemented