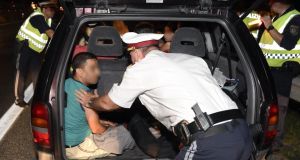 Austrian Police officers stop and search a car with nine adults and two children as they patrol on the motorway near the Austro-Hungarian border, in Nickelsdorf, Austria. Photograph: EPA/Herbert P Oczeret

Austrian authorities have found around 200 asylum seekers and arrested five people traffickers as part of a new operation along the country’s borders, a senior interior ministry official said on Monday.

“In the hours since we started implementing these measures that we agreed with Germany, Hungary and Slovakia, we have been able to get more than 200 refugees out of such vehicles and we have been able to detain five smugglers,” Konrad Kogler, director general for public security at the ministry, said.

“We are not in violation of Schengen,” she said.

Austria toughened controls at its eastern borders in an attempt to clamp down on trafficking of refugees, triggering a queue of vehicles this morning stretched some 20km back into Hungary.

Austrian authorities last week discovered the bodies of 71 refugees in an abandoned lorry that had travelled through Hungary.

“We will do controls for an undetermined length of time at all important border crossings in the eastern region, looking at all vehicles that have possible hiding places for trafficked people,” Johanna Mikl-Leitner told ORF radio.

Hungary’s M1 motorway leading to Austria, which also borders Slovakia, Slovenia and the Czech Republic on its eastern side, clogged up due to the checks, which the firm that maintains the road said had started at the weekend.

Over the past three days, Hungarian police said they had caught 8,792 migrants crossing into the country, most of them from Serbia.

The police said on Sunday they had arrested a fifth suspect in connection with the deaths of the migrants found in an abandoned refrigeration truck.