Volume of migrants crossing the border too great to accommodate, rail company says 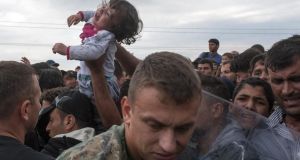 Macedonia announced it was considering building a Hungarian-style border fence to stem a rising influx of migrants from the south. Photograph: Robert Atanasavoski/AFP/Getty Images 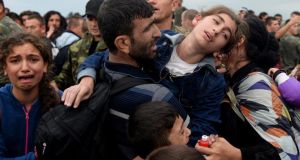 The Gevgelija-Presevo journey is just a part of the journey that the refugees, the vast majority of them from Syria, are forced to make along the so-called Balkan corridor, which takes them from Turkey, across Greece, Macedonia and Serbia. Photograph: Nake Batev/EPA 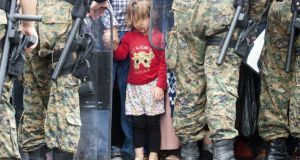 A young girl peeks out between the lines of Macedonian police forces, while waiting to board a bus after crossing the Macedonian-Greek border near Gevgelija. More than 10 thousands refugees and migrants arrived in Piraeus from the overcrowded Greek islands in the last 24 hours. Photograph: Robert Atanasavoski/AFP/Getty Images 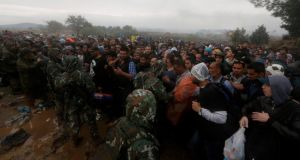 Most of the people flooding into Europe are refugees fleeing violence and persecution in their home countries who have a legal right to seek asylum, the United Nations said on Tuesday. Photograph: Yannis Behrakis/Reuters

Austrian rail company OeBB said on Thursday that train services between Austria and Hungary will be suspended at least for the rest of Thursday because Austria cannot handle the volume of migrants crossing its border.

It was too soon to tell whether the services would resume on Friday, a spokesman for the company said.

“It would be irresponsible to simply let people keep streaming in and spend the night at train stations,” the spokesman said.

Meanwhile, Danish railway company DSB said some train services between Germany and Denmark resumed on Thursday after being suspended the day before.

It was also announced that Danish police will no longer try to stop migrants and refugees passing through the country to get to Sweden and other countries.

The move highlights how European Union countries are struggling to uphold rules under which people fleeing war and persecution are supposed to apply for asylum in the first EU country they enter and not travel from one country to another.

The decision comes amid a surge of migrants and refugees arriving from Germany and refusing to apply for asylum in Denmark, saying they want to go Sweden, Finland or Norway instead.

Danish authorities initially insisted they must register in Denmark but changed their minds after hundreds of migrants demanded the right to cross the country. “We can’t detain foreigners who do not want to seek asylum (in Denmark),”

Denmark’s police chief Jens Henrik Hoejbjerg said. “Therefore, there is no other option than to let them go, and we cannot prevent them from travelling wherever they want.”

In the Danish port city of Roedby, one of the two main crossings from Germany, migrants were seen being picked up by people in private cars. Authorities said at least 3,200 migrants have entered Denmark since Sunday and about 400 have sought asylum.

The Danish move came as Macedonia announced it was considering building a Hungarian-style border fence to stem a rising influx of migrants from the south.

Foreign minister Nikola Poposki was quoted in an interview with Hungarian business weekly Figyelo as saying that said Macedonia will probably also need “some kind of a physical defence” though this would not be a long-term solution.

“But if we take seriously what Europe is asking us to do, we will need that, too. Either soldiers or a fence or a combination of the two,” said Mr Poposki.

West European states including France and Germany have criticised Hungary‘s ongoing construction of a 175-km (108-mile) long, 3.5-metre (11.5-foot)-high fence along its border with Serbia to channel migrants to crossings where they can be registered.

Over 160,000 migrants have entered Hungary from the south this year, transiting Greece, Macedonia and Serbia in that order from war-torn or impoverished countries in the Middle East, Asia and Africa. Almost all seek to reach wealthier western and northern European Union states like Germany and Sweden.

A single-day record of 7,000 Syrian refugees crossed on Monday into Macedonia, a small and relatively poor former Yugoslav republic.

German minister of state for Europe Michael Roth told the same newspaper that Germany expected countries to register migrants who entered the EU over their borders, but that fences were not the right approach.

“We must build a Europe where we protect freedom and guarantee security, but where there is no place for either fences or walls,“ Roth said.

Mr Poposki said Macedonia was doing its best to register all migrants. “But whenever we take seriously what our European partners ask of us, trying to control the border and stop people, we immediately receive a negative international reaction,“ he added, echoing Hungarian complaints.

“Accepting migrants escaping to save their lives is our duty,” Ms Kopacz, speaking ahead of an election in October, told a news briefing at a forum in the Southern city of Krynica Zdroj.

In July, Poland agreed to accept more than 2,000 refugees from Syria and North Africa by 2017. But according to Juncker‘s emergency plan, Poland, the biggest central European economy, would be required to accept almost 10,000 more.

On Wednesday, Ms Kopacz said Poland was considering raising the number of migrants it was willing to accept. On Thursday she appeared to reiterate that position, while expressing sympathy for the refugees’ plight.

“We benefited from the solidarity of our European partners when we had our own refugees. We cannot forget about that, we cannot be immune to this disaster,” she said. She added that Poland should help share the burden, as it may need help when faced with a larger influx of refugees from Ukraine.

“Our solidarity has to be responsible and has to bear reference to our capabilities.”

The main opposition Law and Justice party’s candidate for prime minister in the October election said on Wednesday that the country would not yield to pressure from Juncker over the migrant crisis.