Attitudes harden among Dutch as ever more migrants arrive 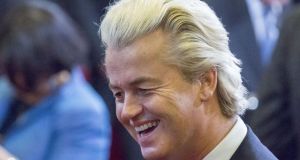 Geert Wilders of the Freedom Party: said the uncontrolled movement of refugees across Europe represented an “Islamic invasion” that had to be stopped. Photograph: Michel Porro/Getty Images

In an indication of the extent to which the influx of migrants from the Middle East is hardening attitudes towards migration, a new survey in the Netherlands shows that almost three people out of 10 are now opposed to any form of immigration – even from other EU countries.

The survey by Ipsos for the public service broadcaster NOS found that 28 per cent of those polled believed the country – already the most densely populated in Europe – should close its borders immediately to all new arrivals seeking to establish permanent residence here.

The attitude reflects growing support for the anti-immigrant Freedom Party of right-wing populist, Geert Wilders, who warned in parliament last week that in his view, the uncontrolled movement of refugees across Europe represented an “Islamic invasion” that had to be stopped.

Not surprisingly, the Ipsos poll showed that 78 per cent of those who supported Mr Wilders were in favour of closing the borders. For supporters of the Christian Democrats that figure is 21 per cent, while for prime minister Mark Rutte’s Liberals, it is 28 per cent, in line with the national average.

A surprising 31 per cent of Socialist Party supporters wanted to end immigration, the figure for the junior coalition partners Labour was 21 per cent and for the influential centre-left D66, it was just 9 per cent. Just over half of those polled – 52 per cent – said they believed the borders should not be closed.

Asked how the arrival of the migrants – the Netherlands is expected to take just over 9,000 – made them feel about the future of the country, 44 per cent said they were pessimistic about the likely impact.

Interestingly, when it came to how the migrants crisis should be tacked, 69 per cent agreed with the Dutch government that the best option was to register them as close as possible to the countries they were fleeing, while investing in facilities in those neighbouring and relatively safe countries.

Last week alone, 3,100 of them registered in the Netherlands, while about 1,800 more arrived in each of the two preceding weeks.

Minister Fred Teevan said local councils had been asked to make available as much accommodation as possible, but it was likely that some would have to be housed on boats, in tents – or even in disused former prisons.