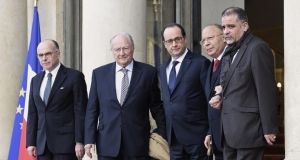 President François Hollande received the leaders of France’s Jewish and Muslim communities late Tuesday in an attempt to restore the unity of the aftermath of the January jihadist attacks.

Dalil Boubakeur, the rector of the Grand Mosque in Paris, had taken offence at remarks by Roger Cukierman, president of the Representative Council of Jewish Institutions in France, just before the council’s annual dinner on Monday night. For the first time in 22 years, Mr Boubakeur did not to attend the dinner, in protest.

”All the violence today, we have to say, is committed by young Muslims,” Mr Cukierman told Europe 1 radio station. Despite an immediate outcry by French Muslims, Mr Cukierman persisted in his speech at the dinner, in the presence of Mr Hollande.

The Jewish leader said he had not wanted “to conflate or stigmatise” Muslims, but wished “to emphasise the fact that all the terrorists who committed murder in the recent attacks claimed to represent Islam”.

Mr Hollande pointed out that the recent desecration of 250 Jewish tombs in Alsace was carried out by “Français de souche” – Frenchmen of white, Christian origin.

The French president said anti-Semitism was “like leprosy, which always returns when civilisations believe they’ve got rid of it.”

Measures will include “more rapid, more efficient punishment” for offenders. Anti-Semitic language will no longer be prosecuted under press laws, but as a criminal offence. And the anti-Semitic nature of a crime will be considered an aggravating circumstance, the president added.

Mr Cukierman had also raised hackles with his remarks about Marine Le Pen, the leader of the extreme right-wing National Front (FN).

Ms Le Pen has worked hard to distance the FN from her father Jean-Marie’s anti-Semitism. Just a few days ago, an FN candidate in next month’s departmental elections, was expelled from the party for anti- Semitic statements.

“They are a very small minority,” he said. “All of us in the Jewish world are aware that behind Marine Le Pen, who is personally irreproachable, there are all the negationists, Vichyists and Pétainists. So for us, the National Front is to be avoided. Her party cannot be frequented.”

In the face of complaints over having called Ms Le Pen “irreproachable,” Mr Cukierman backtracked at the dinner, saying the FN leader “cannot be frequented and is not irreproachable as long as she does not denounce her father’s [anti- Semitic] statements, for which he was condemned in court.”