Another curfew imposed on besieged Turkish city of Cizre 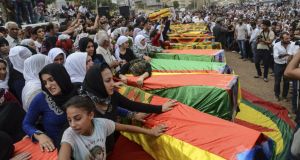 Coffins are draped in the Kurdish flag during the funerals of people killed during clashes between Turkish forces and PKK militants, in Cizre, Turkey. Photograph: Llyas Akengin/AFP/Getty Images

A second curfew in as many days on the besieged Turkish city of Cizre was announced last night following a 36-hour cessation that allowed supplies enter the city and dozens of dead be buried.

Reports from Cizre say ambulances were shot at and government forces targeted civilians following military operations that have killed at least 30 people there. A pharmacist who left the city in southeast Turkey on Saturday after the temporary lifting of a nine-day curfew said he believed there were no visible signs of activity by the Kurdistan Worker’s Party or PKK during the clashes.

“I can’t say I saw any people who were definitely PKK. Some people covered their faces; some people had guns and were armed but they were protecting the local people,” he said, asking not to be identified fearing retribution from the security forces.

“Last [Saturday] night police occupied the emergency services room at the hospital … ambulance drivers said police shot at them last week,” said the pharmacist. Other reports suggest members of the PKK’s youth wing, the YDG-H, have been battling security forces in Cizre.

Tit-fir-tat violence between the Turkish government and the outlawed PKK has resulted in the deaths of more than a thousand militants and dozens of police and security officers since July 24th, ending a truce that came into place when hundreds of PKK fighters left Turkey for Iraq in 2013.

Civilians in Cizre, a predominantly Kurdish city of 100,000 people situated close to the Syrian and Iraqi borders, went without electricity, water and medical supplies for more than a week, and the body of 10-year-old Cemile Cizir Cagirga who was killed in clashes was kept in a family freezer for days. The girl’s mother told a local media outlet that security forces shot her.

Turkey’s interior minister says between 30 and 32 terrorists were killed and suspended Cizre’s mayor, a member of the Peoples’ Democratic Party (HDP), a rival political party to Turkey’s AK Party government. Amnesty International called the operation on Cizre a “disproportionate restriction” while the Council of Europe’s commissioner for human rights Nils Muiznieks questioned the curfew. The PKK is designated a terrorist organisation by Turkey, the European Union and the United States and claims little support among Turkish society outside of sections of the country’s Kurdish population.

The government’s anti-terrorist campaign following a bombing in Suruc that killed 33 activists in July began ostensibly to target Islamic State extremists in Syria. However, the overwhelming focus has been on PKK camps situated in mountains dividing southeast Turkey from northern Iraq and Iran. In response, PKK militants are assassinating police officers and bombing government and security buildings across the country on an almost daily basis.

Many nationalist-leaning Turks believe the Kurdish-centred HDP is partly responsible for the deaths of police officers and soldiers carried out by the PKK over the past seven weeks.

Last week dozens of youths attacked the HDP party’s headquarters in Ankara and a branch office in Antalya was set ablaze following the killings of 26 soldiers in two separate PKK attacks, some of the deadliest in decades.

A poll conducted at the onset of the violence in late July found that 80 per cent of respondents supported government’s operation against “terrorist groups”.

Though Turkey’s president Recep Tayip Erdogan condemned the HDP office attacks, the AK Party caretaker government has doubled down against criticism of its military campaign against the PKK and its supporters.

Mohammad Ismael Rasool has been charged with “working on behalf of a terrorist organisation” though it is unclear what group the charge refers to.

Last week senior opposition politicians, journalists and rights groups were stopped from reaching Cizre by police checkpoints making it difficult to verify events in the city.

Critics of the government say it is targeting the PKK in order to associate blame with the Kurdish-rooted HDP for the recent upsurge in violence and instability, thus damaging its chances at parliamentary elections in November.

“Both the HDP and AK Party have intensified their rhetoric against each other during the pre-election period despite knowing full well they represent each other’s most realistic partners in the peace process,” said Cale Saleh of the European Council on Foreign Relations, a think-tank. “Both sides could have played this better.”