Guy Hedgecoe in the Jarama Valley 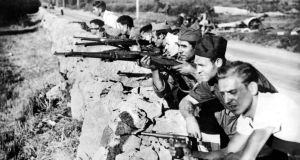 Patrick McKechnie, a 13-year-old with a Northern Irish father and a Spanish mother, is wandering with his schoolmates through a battlefield of the Spanish civil war in the Jarama valley, near Madrid.

This was the site, in February 1937, of one of the conflict’s key battles, and Patrick and his friends clamber around trenches and bunkers as they try to imagine the scene eight decades ago.

Amid the pungent smell of wild thyme, they find, to their surprise, rusted old pieces of shrapnel and the odd food tin from which soldiers once ate.

“I don’t know much about the civil war, but I know it was republicans against fascists,” Patrick says, adding that he would like to learn more about the conflict.

The three-year Spanish civil war ended in 1939 with a victory for the forces of Francisco Franco, a military rebel, and defeat for the leftist republican government. Franco would go on to rule the country as a dictator for the next 36 years, with democracy eventually restored in the late 1970s.

Although the war has been heavily documented in books and films, many Spaniards believe the trauma of the conflict and subsequent dictatorship has never been adequately tackled.

As a result, the civil war remains something of a mystery for younger Spaniards.

“Spanish children are told very little about the conflict at school – it’s almost a case of ‘don’t mention the war’,” says David Mathieson, a British writer and Spanish civil war expert who is guiding Patrick and the other schoolchildren around the Jarama battlefield.

“Up to a point this is understandable – the war left half a million people dead and led to a dictatorship which lasted for nearly 40 years. But that policy of official silence no longer works.”

An apparently growing curiosity about the war is reflected in the popularity of Mathieson’s tours, which also cover other battle sites near Madrid.

The coming months will bring Spain’s conflict, and significant episodes such as the battle of Jarama, back into focus. November marks the 40th anniversary of the death of Franco and next year is the 80th anniversary of the start of the civil war. A flurry of books has already been published reappraising the Franco era.

Mathieson has made his own contribution with Frontline Madrid, a recently published historical guide to battlefields of the Spanish civil war near the capital.

Jarama, he explains, was a key moment not just in the civil war, but in the broader ideological conflict that was being fought out in Europe ahead of the second World World.

In it, 600 inexperienced foreign volunteers, as part of the international brigades, held off Franco’s numerically superior forces, although over half were dead or wounded by the time foreign reinforcements arrived. Many thousands would then die as the battle blazed on, but the republicans had prevented their key Madrid stronghold from being seized. Although they would go on to lose the war, this was a symbolic moment.

“And for the first time [the Axis] were stopped dead in their tracks and it happens here. And it’s done by these Brits and Irish and others, guys who’ve never had any experience at all, but who had the willpower to stand and die before they gave up. European history begins to change here in the valley of the Jarama.”

Among those who died in the Jarama valley were two Irishmen who have achieved near legendary status: Kit Conway and Charlie Donnelly.

Conway, an inspirational leader and former IRA member, died in the early stages of the battle, while fighting in a British battalion. Donnelly, a young political activist and poet, was killed while serving in an American battalion.

Today, cairn-like memorials to Donnelly and Conway stand amid the battlefield’s rolling landscape within a few hundred yards of each other.

As the Spanish civil war stirs interest outside the country’s classrooms, younger generations are starting to understand why these two men, and many others, died.