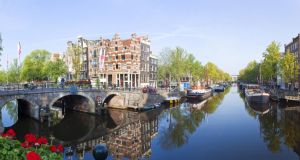 Amsterdam has become the first major European city to publicly fund an animal shelter for pets belonging to victims of domestic violence, based on statistics showing that many victims won’t leave abusive relationships if they have to leave their animals behind.

The shelter opened on January 1st after the city council, despite deep public spending cuts, allocated an initial €20,000 to fund a six-month trial, saying they had been convinced by a growing body of international evidence that animal cruelty was often “a marker of interpersonal violence”.

During the trial period, dogs, cats and other pets will be looked after for two weeks, long enough for their owners to find them alternative accommodation. The city will monitor the difference that makes to the number of victims using women’s shelters.

“Although funding is tight everywhere, this is a problem we felt obliged to acknowledge,” said a city council spokesman.

“We were particularly influenced by a report from Utrecht University which shows that in today’s society the role of pets has changed from ‘companions’ to ‘family members’.”

That report entitled, Animal Abuse and Domestic Violence: Do We Remember the Animals? says that in 55 per cent of cases, women who were beaten – and the victims are overwhelmingly but not only women – said their pets were abused and sometimes killed as well. This supports the findings of other studies, such as the groundbreaking 2008 report from Monash University in Melbourne, Australia, which showed that 33 per cent of women had delayed leaving a relationship for as long as eight weeks out of concern for their pets.

Mothers and their children had witnessed their pets being abused in about 29 per cent of cases, evidence that the violence was being used as a form of psychological control – and increasing the likelihood of the children growing up to be abusive adults.

In the US, research by the American Humane Association has shown that 13 per cent of premeditated animal abuse cases also involve domestic violence, while 70 per cent of animal abusers also had records for other crimes, often “long histories of indiscriminate violence”.

Despite this evidence, vets – who could sometimes be well placed to spot warning signs – have typically been reluctant to get involved, says the Utrecht University report.

Their reasons varied from feeling they hadn’t enough evidence, or hadn’t the right to become involved, to concern about the economic impact on their practices if their “interference” became public.