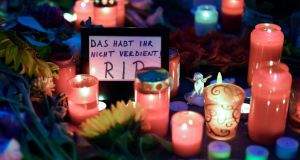 A message at the scene of Friday’s shooting spree in Munich reads: “You did not deserve this.” Ali David Sonboly’s motivation was not Islamist extremism, investigators said, nor have they found any links to Germany’s refugee crisis. Photograph: EPA

The teenager who shot dead nine people and injured 35 in Munich on Friday had planned his attack for a year, according to police.

“He had been preparing for a year,” said Robert Heimberger, head of Munich’s criminal police, at a press conference. His victims were not specifically targeted, added the investigators.

The fact that most of the dead were German teens with a migration background, police said, was a reflection of the Munich neighbourhood and not an indicator of victim profiling.

Last May the teenager set up a fake Facebook profile with a female identity and, on Friday, lured people with the promise of free food to a fast food restaurant at the Olympia Shopping Centre, north of the city centre.

German police arrested a 16-year-old Afghan youth yesterday on suspicion of a connection to the killings. He was under investigation for possibly having failed to report the plans of the gunman and may have played a role in the Facebook post, police said. “There is a suspicion that the 16-year-old is a possible tacit accomplice to (Friday’s) attack,” it said.

A search of the teenager’s bedroom revealed an obsession with shooting sprees. Last year he visited Winnenden – scene of a 2009 school shooting that claimed 16 lives – to take photographs.

On his computer policefound a manifesto “in which he dealt with what he had planned”, said Mr Heimberger, without revealing details. Five years to the day before Friday’s shooting, Norwegian Anders Breivik issued a similar document before shooting dead 77 people, using among other weapons a Glock 17 pistol.

Sonboly also used a Glock 17 with the serial number filed off – most likely originating in Slovakia in 2014. He bought it via darknet, the internet’s unregulated underbelly. The weapons had been deactivated for use in stage productions but had subsequently been retooled.

Investigators say they have been unable to question the gunman’s parents so far and do not yet know where Sonboly, a school student and part-time paper boy, found the money for a weapon likely to have cost several hundred euro.

About 1,500 people attended a vigil at the shopping centre to remember the dead and the injured. The attack has sparked a political debate about stricter gun control in Germany. Both ruling parties in Berlin’s grand coalition agree tougher laws may be required to prevent copycat attacks.

Federal interior minister Thomas de Maizière told the Bild am Sonntag newspaper Germany had to “gauge very carefully if and how it is possible to use legal means” to prevent another such incident. Leading figures in the Social Democratic Party (SPD) called for greater efforts to monitor darknet weapons sales.

Germany has the world’s fourth-highest gun ownership per capita but is considered to have relatively stringent gun control laws.