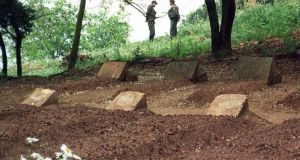 Soldiers guarding the graves of seven French Trappist monks, at their monastery in Tibhirine in May 1996. Photograph: STR/AFP/Getty Images

The families of seven Trappist monks who were decapitated in Algeria in 1996 have appealed to French president François Hollande to fulfil his promise to ensure that Algeria co-operates in investigating their deaths.

Members of the order had lived for 50 years in the monastery of Our Lady of the Atlas, at Tibhirine, in the Algerian mountains. Their story was told in Xavier Beauvois’s 2010 film Of Men and Gods.

Armed men broke into the monastery during the night of March 26th-27th, 1996. The Armed Islamic Group (GIA) claimed responsibility for their kidnapping. The following month, their severed heads were found beside a mountain road. Their bodies were never recovered.

The atrocity has caused tension between Paris and Algiers for 17 years. The Paris tribunal assigned Marc Trévidic, an anti-terrorist judge, to investigate the killings in 2011. Mr Trévidic wants to interview some 20 people in Algeria. He also wants to autopsy the heads, which are buried at Tibhirine, to learn whether the decapitations took place after the monks’ deaths.

Algerian officials never responded to Mr Trévidic. Last December, the families of the monks asked Mr Hollande to raise the subject with Algerian president Abdelaziz Bouteflika during a state visit to Algiers. Mr Hollande promised to “personally supervise the development of this co-operation”. Nothing has happened since.

Asked about the killings in 2004, Mr Bouteflika said that “some truths are better not told right away”.

In the letter delivered to Mr Hollande on Tuesday and published in Le Figaro, the families complained that, “on the Algerian side, no serious action has been undertaken to shed light on these assassinations”.

With the passage of time, they noted, it becomes more unlikely the truth will emerge.