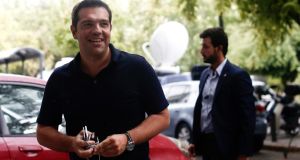 It’s mid-August. In any normal Greek summer, political life would have ground to a halt, politicians, the journalists who hover around them and much of Athens’s population would have decamped to the beach, family village or island, leaving bewildered tourists with the Greek capital almost all to themselves.

But not this summer, where Greeks have found that there is just no escaping the crisis. These past two months, political developments have been hurtling at an uncharacteristic pace, constantly throwing up more surprises and disappointments at a population already weary, politically, socially and economically, after almost six years of unyielding crisis.

After a snap general election in January and a surprise referendum in July, Greeks will head to the polls for the third time this year in late September, following the resignation of prime minister Alexis Tsipras on Thursday night in a calculated gamble to rid himself of his party’s left flank, who are opposed to his decision to sign up to a third bailout with the country’s creditors.

Just over a quarter of Syriza’s 149 MPs have failed to support the government in three key votes since July. On Friday, 25 of the rebel MPs, led by former energy minister Panagiotis Lafazanis, formally split to form a new entity, Popular Unity, which will fight the upcoming election on a pledge to overturn the country’s memorandums and pull Greece out of the euro.

More MPs are likely to join the anti-austerity group, which is now the third largest party in parliament, although prominent Syriza figures opposed to the bailout such as outspoken parliamentary speaker Zoi Konstantopoulou and mercurial former finance minister Yanis Varoufakis have not indicated whether they will be among them.

Still, Popular Unity, which is likely to cross the three per cent parliamentary threshold, poses one of the biggest threats to Tsipras winning a coveted overall majority, according to one observer.

“Since they are very well organised and they are going to get some of the anti-establishment vote, [Popular Unity] will probably manage to enter parliament. Since their success will jeopardise Syriza’s chances for an outright majority, I assume the pre-election period will be ugly for the former partners,” says Aristides Hatzis, professor of law and economics at the University of Athens.

Hatzis also believes it is within Tsipras’s grasp to win an outright majority because of lingering momentum from the referendum that Tsipras called early last month.

The result delivered Tsipras the contradictory message that, while voters rejected the kind of conditions the country’s creditors were demanding in return for another tranche of bailout money, there was little appetite for risking Greece’s membership of the euro zone and returning to the drachma.

“A lot of people who didn’t vote for Syriza in January voted No in July. The deep schism in Greek society made them identify themselves with Syriza. A lot of them do not feel betrayed. They still believe that this government fought hard. So they will reward it with a vote in the general elections,” Hatzis says.

Despite Tsipras’s clear failings over his seven-month tenure – Hatzis charges that the Greek leader managed “single-handedly to destroy an economy in a fragile state of recuperation” through his faulty negotiation techniques, by destroying trust and leading the country to capital controls – he has managed to retain much of his popularity, which he is keen on capitalising on before the full effects of the new bailout deal become apparent.

Tsipras’s high approval ratings are down to two factors, Hatzis says. The two formerly major parties – conservative New Democracy and social democratic Pasok – are more than discredited, with the latter in disarray and the former essentially leaderless. This weakness in other parties means “Tsipras doesn’t have a credible opponent”, he says.

The second reason for Tsipras’s success, Hatzis alleges, is that Greek electorate “remains economically illiterate. The majority of voters cannot understand the size of the destruction, the size of the mistakes and the damage to the economy. They will start realise it in the autumn, at the same time as the implementation of the third bailout agreement and after the elections.”

The elections will also be closely watched to see if Golden Dawn, the neo-Nazi party whose leadership is on trial for founding and directing a criminal organisation, will manage to return as the parliament’s third largest party after Popular Unity – which has more MPs than it – dislodged it from that position.

Golden Dawn will try to show the difference between itself and the other political parties “by trying to play the ‘authentic’ anti-memorandum card”, says Vassiliki Georgiadou, a political science professor at the Panteion University in Athens.