Dilma Rousseff’s position as president of Brazil is precarious

Amid a storm of policy and Petrobras, the president may not be the only one forced out 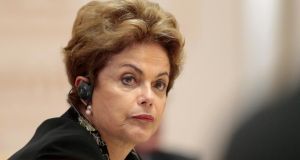 Brazilian president Dilma Rousseff: has vowed a “tooth and nail” defence of her mandate, accusing her opponents of “coup mongering”. But popular support for her has drained away. Photograph: Ivan Sekretarev/EPA/Pool

Nobody should mistake the recent calm of the Brazilian streets since anti-government agitation petered out for evidence that Dilma Rousseff has seen off the threat to her presidency.

If anything, the likelihood she will not make it to the end of her second term has only increased in recent months. At the rate at which presidential problems are piling up, the protesters might not need to regroup to help push her out of the Palácio do Planalto.

But Rousseff is not the only one at risk of going down in the political and judicial maelstrom currently raging. Such is the scale of the crisis, her predecessor and political patron Luiz Inácio Lula da Silva and the Workers Party he founded in 1980 also face grave risks to their political futures.

Lula recently admitted he and Rousseff are in the “dead volume” – a reference to the last dregs of water in São Paulo’s depleted reservoirs. He even admitted what is clear to everyone – that she lied to win re-election last October, presenting herself as the only anti-austerity candidate before unleashing the worst austerity programme in two decades, which is now hitting Brazil’s poorest the hardest.

Lula’s frustration with his protege’s authoritarianism, political ineptitude and economic mismanagement might be understandable. But despite having arranged for her to succeed him in the job, his criticism came across less like a mea culpa and more like a rat abandoning a sinking trip.

Lula has reason to sound panicky. Though it has spread into other areas of state, the root cause of the political crisis remains the corruption scandal in the state-controlled oil giant Petrobras.

Federal police and prosecutors have in 16 months methodically moved up the food-chain, arresting underworld bagmen, the Workers Party treasurer, former Petrobras executives and the owners of its main contractors. Along the way they have built up a picture of the mammoth scheme that saw billions siphoned out of Petrobras into the accounts of its contractors and political masters.

With the recent arrest of some of his closest associates from the business community, Lula himself has speculated that he could be next.

That would set off a political earthquake so damaging many analysts caution it is a step prosecutors would be reluctant to take.

But Ricardo Pessoa, friend of Lula and identified as the “leader of the club” of construction magnates that worked with politicians to defraud Petrobras, has agreed a plea bargain deal – which included details of illegal payments to Rousseff’s re-election campaign.

The president has dismissed Pessoa’s allegations, saying she has “no respect for informers. I was imprisoned by the military regime and I know how this operates.”

It was a crude attempt to equate the legally sanctioned workings of a democracy’s justice system with the torture of a military dictatorship that ended 30 years ago.

Politically it was foolish, only antagonising the judicial system that must rule on the Petrobras investigation. Before then, Brazil’s highest court of state auditors is threatening to reject the fiscal report her government presented for last year, accusing it of cooking the books to hide the chaos her interventionist policies have produced in the public accounts. That could open a second impeachment front.

Rousseff has vowed a “tooth and nail” defence of her mandate, accusing her opponents of “coup mongering”. But popular support for her has drained away. A recent survey found 68 per cent of voters think her government bad or terrible. Most worryingly, her rejection rate among the lowest income brackets – those who secured her a second term in October – is now 62 per cent.

Numbers like that only embolden the vultures in Brasília circling a president the city’s political class always considered an unwanted outsider forced on them by Lula.