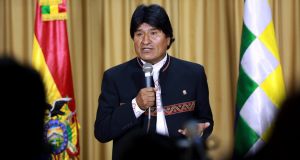 A corruption affair involving his former lover has suddenly left Bolivia’s president Evo Morales facing the possibility his decade-long electoral winning streak might be drawing to an end.

Voters in the Andean nation go to the polls on Sunday in a referendum to decide whether to allow Mr Morales seek a fourth term in office as he bids to extend his presidency out to 2025 when Bolivia celebrates the bicentenary of its independence from Spain.

When the ballot measure was proposed last year it was expected to pass with the customary ease the country’s first leader from its indigenous majority has enjoyed at the ballot box since he was elected president in 2005.

But final opinion polls show support for the Yes and No camps is now evenly split with the No campaign gaining ground since accusations aired last week of influence-peddling involving Morales’s former partner Gabriela Zapata.

A bachelor, Mr Morales has been forced into admitting a previously unacknowledged relationship with the glamorous businesswoman with whom he had a son in 2007. The child died shortly after he was born, after which the couple separated. Given Mr Morales has long played up his reputation as a roguish charmer their affair on its own is unlikely to have much impact on the race. He has already acknowledged two other children by different women.

But far more damaging is the accusation by journalist Carlos Valverde, who revealed the relationship, that Mr Morales later used the presidency to help further Ms Zapata’s career.

In 2013 she was employed as an executive by CAMC Engineering, one of the many Chinese companies welcomed into Bolivia during Mr Morales’s time as president. It has won lucrative contracts from the Bolivian state to carry out infrastructure projects.

The scandal centres on the fact that the value of these contracts jumped from $214 million (€193 million) to more than half a billion dollars after Zapata was hired by the Chinese company. A congressional commission was created this week to investigate the contracts.

The opposition has seized on Valverde’s claims while Mr Morales and his Movement Towards Socialism (Mas) party have responded by accusing US “imperialism” of being behind the scandal. The government press agency has sought to discredit Valverde, claiming he was head of the country’s intelligence service when the country was closely allied with Washington.

Mr Morales says he lost contact with Ms Zapata (29), who is now a prominent socialite in the eastern city of Santa Cruz, after they separated and was unaware she had been hired by CAMC Engineering. But those claims were undermined when photos emerged showing the two together last year.

Mr Morales admitted the meeting while denying they were still in touch.

“I remember a woman with a familiar face approached me during carnival wanting a photo. This is true,” he explained. “The face seemed familiar and when the photo appeared I said to myself: ‘Ah, I believe this is Gabriela.’”

The Mas campaign has also been undermined by photos circulating on social media of the luxury mansion belong to Ms Zapata. Despite a decade of strong economic growth Bolivia remains one of the poorest countries in the Americas.

Until now Mr Morales has been insulated from evidence of widespread official corruption by his steady management of the economy and social policies which have seen poverty drop from 60 per cent when he took power to less than 40 per cent in 2013, the last year for which statistics are available.

But the country remains socially volatile, as demonstrated on Wednesday when six people died after protesters set fire to the municipal offices of the indigenous city of El Alto. City officials blamed former officials from the city’s previous Mas administration who used the fire to destroy documents relating to the investigation into them.

Bolivia’s deputy interior minister, Marcelo Elío, in return accused the opposition of faking the attack against its own officials in order to try and destabilise the Mas ahead of Sunday’s referendum.