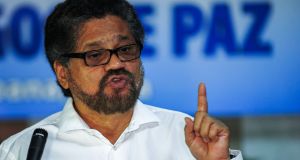 Farc negotiator Ivan Marquez: “We have agreed with the national government that these minors cannot be prosecuted and that, as victims of an immense social and political drama, they will be treated as such and never as criminals.” Photograph: Yamil Lage/AFP/Getty Images

Colombia’s government and leftist Farc rebels have agreed to a roadmap for children under 15 to leave guerilla encampments and re-integrate into civil society, as part of negotiations aimed at ending Latin America’s longest war.

The accord is a first step towards all minors leaving rebel ranks, the two sides said in a joint statement read out at a news conference in Havana, where they have been negotiating a peace deal for more than three years.

The Farc has long been accused by the government and human rights groups of using child solders as cannon fodder.

The rebel group announced last year it would stop recruiting minors, but no deal was reached on handling teenagers and children already in its ranks.

“The deal foresees the Farc handing over information necessary to identify and locate the minors still in these camps and collaborating with (their) exit,” the government’s top negotiator, Humberto de la Calle, said.

The drug-fueled civil war in Colombia has killed some 220,000 people and displaced millions of others since 1964.

The Farc’s forces are estimated at 8,000 guerrillas but it is not known how many might be minors. The group said on Sunday there were 21 children under 15 among its ranks.

“We have agreed with the national government that these minors cannot be prosecuted and that, as victims of an immense social and political drama, they will be treated as such and never as criminals,” Farc lead negotiator Ivan Marquez said.

Under the terms of the deal, the U.N. children’s agency Unicef and the International Organisation for Migration will oversee the procedure to ensure both sides stick to their promises.

All the illegal armed groups in Colombia – rebels and right-wing paramilitaries, along with criminal gangs – have forcibly recruited teenagers or taken on under-age volunteers, especially in remote rural areas with few job opportunities.

The groups use children as messengers, informants, cooks and porters. FARC rebels also trained them to use weapons, grenades and mortars and to plant home-made landmines.

Marquez said the Farc had never recruited minors under 15, but many had arrived orphaned by paramilitary violence or fleeing from “mistreatment and the absence of a future.”

Poverty and famine among Colombia’s youth was a greater problem than the existence of minors in Farc camps, he added.

A deadline for a final peace deal was missed in March, but Colombian President Juan Manuel Santos said last Wednesday his government hoped to conclude a peace deal with the Farc rebels “in the very near future”.