Brazil sends in the clowns to vote on Rousseff impeachment 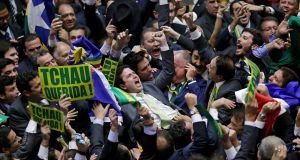 Brazilian parliamenarian Bruno Araujo (centre) celebrates with fellow congressmen after his vote in favour of the impeachment of President Dilma Rousseff was enough to confirm the process. Photograph: Ueslei Marcelino/Reuters 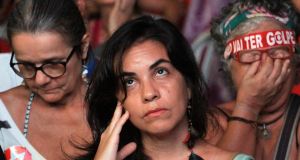 When Brazil’s best loved clown Tiririca was elected to congress in 2010 there was much gnashing of teeth among commentators about what his victory said about the direction of the country’s politics.

But on Sunday as the lower house voted on whether to impeach President Dilma Rousseff over accusations she broke budgetary laws it was clear that Tiririca not only fits right in but is far from the biggest joker in the political pack.

In the legislature’s most important session in almost a quarter of a century many of its members conducted themselves with all the decorum of drunken football fans at a local derby.

The session started with a shoving match between the president’s supporters and opponents, many easily identifiable by the Brazilian flags draped on their shoulders, often combined with that of their home state, while the president’s backers preferred red.

Once the fracas died down there were hours of poorly-delivered speeches by party leaders that were largely ignored by most deputies who instead spent the hours wandering between the benches and chatting among themselves and taking selfies with selected family members and supporters invited into the chamber. At times it felt like an open day though the underlying tension occasionally broke the surface with the eruption of shouting matches between the rival blocs.

One party leader even attempted to lead the chamber in song while opposition deputy Wladimir Costa ended his rant against the president by setting off a confetti bomb that drew cheers and quickly became a hit on the web. “You have to do something different to stand out in this place,” said the congress member who raked up the most absences during the 2015 legislative year.

“The world is looking on and what they see is a circus spectacle,” lamented Chico Alencar, a deputy from the left-wing Socialism and Liberty party that opposes both Rousseff’s administration and the effort to impeach her.

Things only worsened when it came to the voting, with each of the 511 deputies present called to the rostrum to deliver their decision. Few of the overwhelming majority that voted to impeach bothered grappling with the charges against the president contained in the motion.

Instead there were shout-outs to their home towns and states, homages to parents, birthday greetings to grandchildren and endless invocations of future Brazilian generations and God.

For some of the more serious deputies it was too much. After his vote against impeachment, former Big Brother winner and Brazil’s first openly gay deputy Jean Wyllys spat at right-wing deputy Jair Bolsonaro. Later he said he reacted after being insulted by the notoriously homophobic former military officer who praised one of the last military dictatorship’s most feared torturers when giving his vote.

As the session dragged on into the night and defeat for Rousseff looked increasingly likely it was hard not to sympathise with her backers when they denounced the “farce” under way. Voting for the Eurovision looks dignified by comparison.

Reports filtered into the press gallery that those attending the much smaller than expected pro- and anti-impeachment demonstrations in front of the congress building and in other cities around the country were drifting away; some of them perhaps turned off by the antics of the lawmakers they had elected only 18 months ago.

But there was a darker side to Sunday’s tragi-comedy. Bolsonaro is using the current political crisis to position himself as the extreme-right’s first viable presidential candidate since the return of democracy.

No sense of irony

During the debate many deputies accused Rousseff and her Workers Party of corruption with no sense of irony considering at least 299 of the chamber’s 513 members are being investigated for wrongdoing, according to fact-checkers at Piauí magazine.

And the spider at the centre of Sunday’s web was Eduardo Cunha. The president of the lower house, it was he who launched the impeachment process in revenge for the Workers Party’s failure to help protect him after he was caught lying about millions of dollars salted away in Switzerland, allegedly stolen from state oil giant Petrobras.

For hours he sat impassively through Sunday’s session as deputies from both sides denounced him as a “gangster” and “thief”. Many expressed the hope that after Rousseff, he would be the next to face a vote on his mandate but the size of his victory over the government – 367 against 137 – shows the extent of his influence.

Now he has all but delivered the presidency to vice-president Michel Temer, another politician cited in the Petrobras investigation. Many Brazilians have expressed the hope that Rousseff’s removal will allow the country exit from its current political and economic crisis in light of the undeniable disintegration of the president’s ability to govern.

But equally it could be the case that impeachment might only deepen the moral swamp Brazilian public life finds itself sinking into.