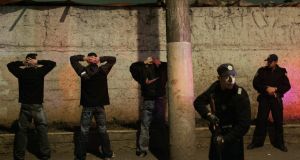 Youths in São Paulo are checked in a security crackdown by police in May 2006. Photograph: Mauricio Lima/AFP/Getty Images

Families of victims of the biggest peacetime massacre in Brazil’s modern history have hope, after a 10-year campaign, that police officers might be held to account for the deaths.

Brazil’s top federal prosecutor has filed a court petition seeking permission for federal police to investigate the murder of five men by a death squad in May 2006. He claims that state authorities in São Paulo, where the murders took place, were guilty of “failures and grave omissions” when deciding to archive the case without filing any charges.

The Parque Bristol killings in 2006 were part of a wider wave of violence that terrorised Brazil’s most populous state between May 12th and 20th, 2006. It started when São Paulo’s main criminal organisation, a prison gang known as Primeiro Comando da Capital (First Command of the Capital, or PCC after its Portuguese initials), attacked the state, ostensibly over the transfer of its jailed leaders to maximum security jails.

After 59 police officers and other public officials were murdered, rank-and-file officers – both in uniform and operating as death squads – struck back. They were encouraged by then state secretary for security Saulo de Castro Abreu Filho, who was under intense criticism for the breakdown of law and order which left Brazil’s biggest city and financial hub a ghost town.

Hundreds of mainly young men in poor neighbourhoods were shot dead in what police claimed were confrontations with criminals, but which independent forensic experts say were mostly summary executions. Many more were killed by death squads which, for a week, operated with impunity in neighbourhoods saturated with police.

Many of those killed had criminal records but no known affiliation with the PCC. The majority seem to have been selected at random, their crime to be young, poor and mainly black residents of communities where the gang operated.

Once the violence subsided São Paulo’s police and state prosecutors made quick progress in jailing those who murdered police officers. But their investigation into the killing of civilians by uniformed police and death squads made little headway. Most were archived without charges being brought, including the Parque Bristol case.

São Paulo’s authorities insist that, despite the lack of prosecutions, the violence in 2006 was properly investigated and say the Parque Bristol case should not be reopened at federal level unless there is new evidence.

Janot’s request was backed by victims’ families, who since 2007 have demanded federal involvement in light of what they say is the politically motivated failure by state authorities to hold agents of the state responsible for the deaths.

“The federal prosecutor’s request is a victory but we are demanding that all cases from May 2006 be federalised as São Paulo’s authorities had no interest in investigating what were crimes carried out by the state,” says Débora Maria Silva, whose son was murdered in the violence and who now co-ordinates Mothers of May, which has campaigned for justice.

The possibility of federal involvement in investigating police violence in 2006 breaks with Brazilian tradition, which has long seen public security as the preserve of state governments. All levels of Brazilian government have historically been reluctant to confront the culture of impunity within police forces, which have tended to react violently to what they see as unwarranted outside interference by politicians.

“Despite the passage of time, investigating the crimes of 2006 is important as the failure to do so has only fed the sense of impunity within the police which results in these massacres by death squads,” says Ariel de Castro Alves, a human rights lawyer who has represented victims’ families and who sits on the state’s human rights council Condepe.