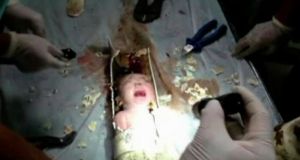 An abandoned newborn baby boy is seen in a sewage pipe following his rescue, in this still image taken from video, in Jinhua city, Zhejiang province. Photograph: Local Firefighter Handout via CCTV/Reuters TV 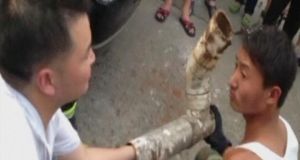 Rescuers try to reach a trapped infant inside a piece of sewage pipe, in this still image taken from video, in Jinhua city, Zhejiang province.China Central Television via REUTERS. 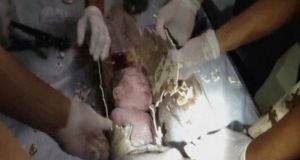 Firefighters and doctors rescue an abandoned newborn baby boy by cutting away a sewage pipe piece by piece, in this still image taken from video, in Jinhua city, Zhejiang province. Photograph: China Central Television via REUTERS.

Video footage of the two-hour rescue that followed has been broadcast widely on Chinese news programmes and websites.

The child - named Baby Number 59 after the number of his incubator - was reported to be safe in a nearby hospital.

There are frequent reports in the Chinese media of babies being abandoned, often shortly after birth, a problem attributed variously to young mothers unaware they were pregnant, the birth of an unwanted girl in a society which puts greater value on boys or China’s strict family planning rules.

In the latest case, the infant was found in the sewage pipe in a residential building in Jinhua in the wealthy coastal province of Zhejiang on Saturday afternoon after residents reported the sound of a baby crying, state television said last night.

Firefighters had to remove the pipe and take it to a nearby hospital, where doctors carefully cut around it to rescue the baby boy inside, the report said.

Police are treating the case as an attempted murder, and are looking for the mother and anyone else involved in the incident.

News of the rescue prompted an outpouring of goodwill from strangers, who came to the hospital with nappies, baby clothes, powdered milk and offers to adopt the child.

The landlord of the building told Zhejiang News that it was unlikely the birth took place in the toilet because there was no evidence of blood and she was not aware of any recent pregnancies among her tenants.

The case has been widely discussed on China’s Twitter-like service Sina Weibo due to the graphic nature of the footage, with calls for the parents to be severely punished.

“The parents who did this have hearts even filthier than that sewage pipe,” wrote one user.