Once-liberal Indian Ocean archipelago has been transformed by repressive measures 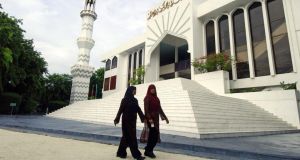 Maldivian women walk past the Grand Friday Mosque in the island capital of Malé. Few visitors get to see the reality of life for locals in the Indian Ocean archipelago who live in an increasingly harsh regime under President Abdulla Yameen Abdul Gayoom. Photograph: AFP Lakruwan Wanniarachchi/AFP/Getty Images

On arrival in the Maldives, holidaymakers bound for the exclusive resort of Gili Lankanfushi are whisked from the airport to a speedboat, given a freshly prepared coconut to sip and a cloth bag bearing a slogan: “No News, no Shoes.” The idea is to place your shoes in the bag during the 20-minute boat journey and forget them, along with distressing world events, for the duration of your stay at the tropical island paradise.

Avoiding the headlines may be no bad thing while watching sea turtles swim under your luxurious water villa, or while walking barefoot along the sparkling lagoon’s palm-shaded white beaches. It is certainly no bad thing for the Maldivian tourism industry, because the news is not good from this resort archipelago of some 1,200 low-lying coral islands in the Indian Ocean.

In April, following a 60-year moratorium, the Muslim country’s government reactivated the death penalty. Facilities are being built at a prison on Maafushi Island to have murder convicts executed by lethal injection. The age of criminal responsibility in the Maldives is 10, but children as young as seven – who may be found guilty of certain crimes under Islamic sharia – could now potentially face a death sentence.

Executions of convicted minors would take place once they turned 18. The government has defended the measure in the face of international criticism, citing the state’s overcrowded prisons and rising violence between drug gangs.

Few tourists witness such crime or hear about how the island paradise’s faltering experiment with democracy has given way to increasingly repressive measures that have curtailed the lives of Maldivians and facilitated the rise of Islamic extremism. This is because few holidaymakers visit the capital, Malé, a crowded island not quite 6sq km resembling a Lilliputian Manhattan and home to almost half the country’s 340,000-strong population.

Tourism apartheid
Under what is often referred to locally as tourism apartheid – a policy of transferring visitors by seaplane or speedboat directly to resorts from the airport island – holidaymakers have little contact with locals. The resort islands are uninhabited beyond the hotel complexes, and most of their employees are Bangladeshi immigrants.

“To the tourist on a resort, the Maldives is as liberal and free as any place in the West, but outside the resorts, the Maldives is repressive and controlled,” says Aishath Velezinee, a human-rights advocate who served in the administration of pro-democracy president Mohamed Nasheed before he was ousted in 2012. The president is Abdulla Yameen, half-brother of the dictator who ruled the country for 30 years, Maumoon Abdul Gayoom.

“Bikinis, alcohol sales and consumption, unmarried and homosexual sex are all permitted in tourist resorts,” says Velezinee, “but they are all crimes outside resorts.”

Punishment for such transgressions is harsh. More than 100 public floggings are carried out each year for “fornication”, the majority on women and girls. Last year an international outcry saved a 15-year-old rape victim from 100 lashes. British prime minister David Cameron was urged to intervene, and rights groups appealed to honeymooners to avoid destinations with poor human rights records. The episode did not stop British royal couple William and Kate from holidaying in the Maldives earlier this year.

The system of double standards has had little effect on business. With more than a million visitors each year and rising, the €2.5 billion-plus tourism sector is the main source of revenue, ahead of fishing.

“The official line is that tourists – and their polluting, infidel views – should be kept away from the Maldivian people for the sake of the people’s Islamic faith. But there is another side to it,” says Azra Naseem, a Maldivian who is visiting fellow at the International Institute of Conflict Resolution and Reconstruction at Dublin City University, where she is researching the Islamic radicalisation of her country. “If tourists do not see or know about what is going on with the people of the Maldives, they will continue to keep coming. If they knew the truth they might stop.”

Fundamentalist regime
The truth, she says, is that the former British protectorate that gained independence in 1965 has been transformed from a moderate Islamic nation into an increasingly fundamentalist regime led by opportunists who have gained politically by allowing religious radicals to dictate state affairs.

“The changing of an entire population’s religious beliefs and practices within the space of a decade – in ways that roll back almost all progressive ideas that it has embraced over centuries – is extremely serious,” says Naseem.

“Salafi and Wahhabi ideologies have become not just dominant but almost the only religious ideology in town. Counter-narratives are non-existent,” he says.

“An increasing number of parents are opting to home- school children rather than ‘spoil’ them with education. Little girls are being made to wear headscarves, sexualising them as early as five or six. But to foreign observers it’s not serious because people aren’t killing each other – yet. Perhaps now that Maldivians have been found fighting in Syria with some of the most violent Islamists there may be more attention paid to the desperate situation in the country.”

Some 20 Maldivians are known to have joined the fight against the Assad regime in Syria, and at least two have died in suicide bombings there. By saying little on the topic, argues Naseem, the government is tacitly supporting such radicals.

Critics of former dictator Gayoom, who at 76 reportedly still pulls the presidential strings, blame him for engineering the changes for his benefit.

“In the late 1990s, when fundamentalists began to emerge in Maldivian society, he clamped down hard on them” and banned the hijab, says Naseem. “As a dictator there were no repercussions for him when he jailed the radicals, even tortured them, to stop their ideas from spreading. Now he has declared himself an ally who shares their ideologies.”

Influx of preachers
Predominantly Buddhist for hundreds of years, the Maldives converted to Islam in the 12th century. A relatively relaxed version of the religion was practised under Gayoom until 2004, when an influx of preachers, funded mainly by Saudi Arabia, arrived after the tsunami. It had caused widespread damage and killed some 100 people.

“It was a turning point in the radicalisation process,” says Naseem. “Local Islamists were very clever in their use of the tragedy to convince Maldivians that the tsunami was punishment from Allah for not practising the ‘right’ Islam – which is the ‘purist’ Islam that Salafis and other fundamentalists want all Muslims to turn to.”

The result is a society transformed beyond recognition, says Velezinee: “A decade ago, women wearing the veil were a minority and women wearing the full black hijab were hardly seen. Today the Arab-style full veil is common.”

Maldivian women in their 20s and early 30s recall how they could stroll around Malé as teenagers wearing strappy tops and shorts. “Now you just couldn’t do it,” says one. “You’d be shouted at and chased.”

Opponents of the new ideology criticise the government on social media sites but dare not do so openly because their comments risk being construed as unIslamic, thus unconstitutional and liable to severe punishment. Under the constitution Maldivians must be Muslim to be citizens, and Sunni Muslim to run for political office. Religion, a taboo subject, is avoided even by journalists.

The administration will be hoping tourists continue following the “No news, no shoes” advice. So far, there is no reason to fear they won’t.