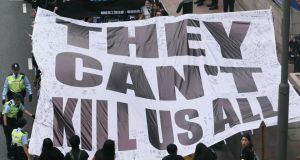 Demonstrators carry a banner during a march against violence on journalists in Hong Kong today. Photograph: Tyrone Siu/Reuters

Thousands of protesters rallied outside the Hong Kong’s government headquarters on Sunday to condemn a knife attack on a former newspaper editor and to voice support for press freedom amid growing concern over Beijing’s influence in the media.

Kevin Lau Chun-to, who until recently had been chief editor of Ming Pao, a Chinese-language newspaper known for its investigative reports, was stabbed in the back and legs several times by a man in a helmet on Wednesday. The assailant rode off on a motorcycle with an accomplice. No one has been arrested in connection with the attack.

Dressed in black and wearing blue ribbons, symbolising press freedom, protesters carried a large banner with the words “They can’t kill us all”. Other banners and placards read “Freedom from fear” and “Protect press freedom”.

Police have not established a motive for Mr Lau’s stabbing although suspicions have spread that powerful individuals from mainland China or pro-Beijing allies opposed to the city’s push for full democracy may have had a hand in the attack.

“We’re not going to bow to the intimidation,” said Shirley Yam, vice-chairwoman of the Hong Kong Journalists’ Association, one of the organisers of the protest. “That’s the strong message we want to send whoever it is that the Hong Kong media is going to stand firm and do whatever’s best for press freedom and the right for our citizens to be informed.”

Organisers put the number of demonstrators at 13,000, while police said there were 8,600 at the peak.

Mr Lau left the intensive care unit of the hospital yesterday, although his wife said his recovery would take time. “The reality is the wounds he suffers are deep and serious. His road to recovery will be a long and winding one,” his wife Vivien said in a statement.

Hong Kong, a former British colony that returned to Chinese rule in 1997, is a freewheeling capitalist hub which enjoys a high degree of autonomy and freedom, but Beijing’s Communist Party leaders have resisted public pressure for full democracy.

Mr Lau was recently replaced at Ming Pao by a Malaysian Chinese journalist with suspected pro-Beijing leanings, causing a revolt in the paper’s newsroom where journalists suggested the publication’s independence might be undermined.

The new editor, Chong Tien-siong, attended the protest today and was quoted in local media as saying he was impressed with the turnout and hoped police could find the culprits soon.

The United States and European Union have expressed concern over the assault on Mr Lau and diplomats in Hong Kong said it underscored fears that the city’s freedoms were being eroded, concerns echoed more broadly across the city.

Media outlets have periodically been subject to attacks in Hong Kong. The offices of a small independent media outlet were recently ransacked and a car rammed the front gate of the home of Jimmy Lai, publisher of Hong Kong’s popular anti-Beijing newspaper, the Apple Daily.