General Tanasak Patimapragorn says how much he loves Wang Yi 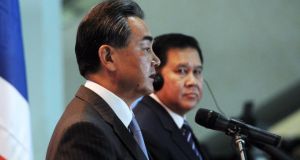 The foreign minister for the Thai junta, Gen Tanasak Patimapragorn, professed to having a crush on his Chinese counterpart Wang Yi while sharing a podium at a meeting of Asian leaders.

“If I were a woman I will fall in love with his excellency,” he said in English at a news briefing in the Malaysian capital Kuala Lumpur, following a regional security meeting of the 10-nation Association of Southeast Asian Nations (Asean).

The Thai junta, led by former army chief and now president Prayuth Chan-Ocha, has worked hard to ensure closer relations with the Chinese since the coup last year, the 12th putsch since 1932.

Since the coup, relations with Washington, Thailand’s traditional ally, have been strained.

In July, Thailand deported more than 100 Uighurs who had been encamped in Songkhla province.

Although they claimed Turkish nationality, China said the Uighurs were from Xinjiang and asked for them back.

Gen Tanasak is a close adviser of prime minister Prayut and, when he was asked about diplomatic relations, he said: “At this moment we believe this is the best time for our relationship. Especially for my personal contact with minister Wang Yi who is a very nice and polite person.”

He spoke of how Thailand’s relationship with China goes back more than 1,000 years. Thailand is home to the largest overseas Chinese community, some nine million people.