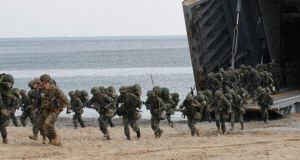 US and South Korean marines participate in a joint landing operation drill in Pohang, about 370 kmsoutheast of Seoul, April 26, 2013. Photograph: Lee Jae-Won /Reuters

South Korea will pull out all remaining workers from a jointly run industrial zone in North Korea, it said on today, after Pyongyang rejected a call for formal talks to end a standoff that led to operations being suspended.

The decision to remove about 170 people from the Kaesong factory park located just north of the armed border deepens a conflict between the two Koreas and puts at risk their last remaining channel of exchange that resulted from their breakthrough 2000 summit and a bid to improve ties. The two Koreas remain technically at war under a mere truce that ended hostilities in their 1950-53 conflict and North

Korea, angry at UN sanctions and joint South Korean-US military drills, has threatened both countries with nuclear attack in recent weeks. “Because our nationals remaining in the Kaesong industrial zone are experiencing greater difficulties due to the North’s unjust actions, the government has come to the unavoidable decision to bring back all remaining personnel in order to protect their safety,” South Korean Unification Minister Ryoo Kihl-jae said.

The North withdrew its 53,000 workers from the complex this month amid spiralling tension between the two Koreas. The North has prevented South Korean workers and supplies from getting in to the zone since April 3rd.

Impoverished North Korea rejected the proposal of talks, saying the South has acted in an “unpardonable” manner to jeopardize a “precious” legacy of the rivals’ bid to seek peace.

The North’s National Defence Commission, its supreme leadership body, repeated that what it saw as the reckless behaviour of the South had thrown into question the safety of the zone’s operations.

The Kaesong project opened in 2004 as part of a so-called sunshine policy of engagement and optimism between the two Koreas, and 123 South Korean companies produced clothing, household goods and motorcycle helmets employing local workers.

The zone was a lucrative source of cash for the North, providing it with almost €69 million a year. South Korean manufacturers have been paying about $130 a month to North Korea for each of the workers they employed.

Yesterday South Korea made the proposal for formal talks as the South Korean workers who remained at the zone were believed to be running out of food and other supplies. It had demanded an answer from the North by today.

The number of South Koreans in the zone has dwindled from the 700 or so normally needed to keep the factories running to about 170, seen as the minimum number needed to safeguard assets at the 1 trillion won ($894.73 million) park.

North Korea stepped up defiance of UN Security Council resolutions in December when it launched a rocket that it said had put a scientific satellite into orbit. Critics said the launch was aimed at developing technology to deliver a nuclear warhead mounted on a long-range missile. The North followed that in February with its third test of a nuclear weapon. That brought new UN sanctions which in turn led to a dramatic intensification of North Korea’s threats of nuclear strikes against South Korea and the United States.