At least 36 people are killed and 43 injured in a stampede during a New Year's celebration on the Bund, a waterfront area in central Shanghai. Video: Reuters 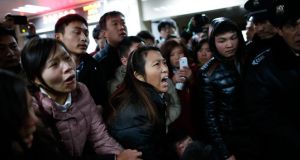 Security guards hold a line to keep relatives away from the emergency area in a hospital where some of the injured from the stampede were admitted. A stampede in Chen Yi Square on the Bund killed at least 35 people during New Year’s Eve celebrations in Shanghai. Photograph: Xing Zhe China out/EPA

Chinese president Xi Jinping has called for an investigation into a stampede that broke out on New Year’s Eve on Shanghai’s Bund waterfront, killing 36 people, after fake money was thrown down from a nightclub above the throng.

The dead ranged in age from 16 years to 36 years old, the state agency Xinhua reported, and most of the victims were female students. Scores more were injured.

The Shanghai Municipality Information Office said that large crowds started to gather on Chenyi Square, on the famous historic promenade, shortly before midnight.

Crowds apparently went into a frenzy when fake banknotes were thrown down from a nightclub above.

The Shanghai-based ‘The Paper’ reported that coupons that looked like US dollars were thrown from the 18th floor of a high-rise building for about three minutes before the stampede happened.

Wu Tao, who saved an injured woman, told The Paper that the coupons led to temporary chaos on the ground.

President Xi said “all efforts should be taken to treat the injured from the Shanghai stampede accident, and authorities should strengthen public security measures during the holidays to ensure the safety of people and their property,” Xinhua said.

One eyewitness surnamed Yin told the agency that at some point the revellers gathered on the Bund began to move and push each other, then suddenly “layers upon layers” of people began to fall on top of each other.

Others hooted and shouted during the stampede, unaware of what was happening below.

“As soon as the crowd stirred, I rushed to protect the two children in front of me. Later I turned around for my son, but he had been pushed off the platform,” Ms Yin said. “When he was rescued, his head was covered in his coat; there was bruise on his forehead and two deep-creased scars in his neck. Blood came out from his mouth and nose. Black footprints were all over his clothes.”

The Bund was constructed during the era when Shanghai was controlled by foreign powers in the early years of the last century, and faces the gleaming skyscrapers of the new Pudong financial district across the Huangpu River.

The waterfront area has been largely redeveloped and is a popular place for tourists to gather, especially at holiday times.

Shanghai has cancelled New Year’s events and it’s the worst tragedy in the city since an apartment building fire killed 58 people in 2010.

In recent years, China has marked events like New Year’s with celebrations, but the biggest date on the social calendar is Chinese New Year, which this year falls in mid-February.

Premier Li Keqiang told local authorities to “make every effort” to reduce injury-related deaths and console relatives, adding that strict precautions should be taken during the holiday season against major incidents, “and public safety and social stability should be ensured”.

There were criticisms in the state media of how the gathering on the Bund had been policed, with the Beijing News quoting a resident describing the event as “chaos” with one-third of the number of police there compared with previous years.