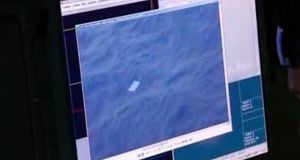 A view of a floating object is seen on a computer screen onboard a Royal New Zealand Air Force plane searching for wreckage from Malaysia Airlines Flight MH370. Photograph: Reuters.

An air and sea search for the missing Malaysian passenger aircraft moved 1,100km (685 miles) north yesterday, after Australian authorities co-ordinating the operation in the remote Indian Ocean received new information from Malaysia that suggested the plane ran out of fuel earlier than thought.

The dramatic shift in the search area, moving it further than the distance between London and Berlin, followed analysis of radar and satellite data that showed the missing plane had travelled faster than had been previously calculated, and so would have burned through its fuel load quicker.

“Photographic imagery of the objects was captured and will be assessed overnight,” the Australian Maritime and Safety Authority (AMSA) said.

“The objects cannot be verified or discounted as being from MH370 until they are relocated and recovered by ships.”


Latest twist
The latest twist underscores the perplexing and frustrating hunt for evidence in the near three-week search for Malaysia Airlines Flight MH370, which vanished from civilian radar screens less than an hour into a Kuala Lumpur to Beijing flight.

Malaysia says the plane was likely diverted deliberately but investigators have turned up no apparent motive or other red flags among the 227 passengers or the 12 crew.

Malaysian officials said the new search area was the result of a painstaking analysis of Malaysian military radar data and satellite readings from British company Inmarsat carried out by US, Chinese, British and Malaysian investigators.

Engine performance analysis by the plane’s manufacturer Boeing helped investigators determine how long the plane could have flown before it ran out of fuel and crashed into the ocean, they said.

“Information which had already been examined by the investigation was re-examined in light of new evidence drawn from the Inmarsat data analysis,” Malaysia’s acting Transport Minister Hishammuddin Hussein told a news conference.

For more than a week, ships and surveillance planes have been scouring seas 2,500km (1,550 miles) southwest of Perth, where satellite images had shown possible debris from the flight, which went missing on March 8th.

A flotilla of Australian and Chinese ships would take longer to shift north, however, with the Australian naval ship the HMAS Success not due to arrive until this morning.

The new search area is larger, but closer to Perth, allowing aircraft to spend longer on site by shortening travel times. It is also vastly more favourable in terms of the weather as it is out of the deep sea region known as the Roaring 40s for its huge seas and storm-force winds.


Better weather
“I’m not sure that we’ll get perfect weather out there, but it’s likely to be better more often than what we’ve seen in the past,” John Young, general manager of AMSA, told reporters, adding that the previous search site was being abandoned. “We have moved on from those search areas to the newest credible lead,” he said.

The Australian Transport Safety Bureau said earlier the shift was based on analysis of radar data between the South China Sea and the Strait of Malacca. At that time, the Boeing 777 was making a radical diversion west from its course.
– (Reuters)