Compensation to be paid before anniversary of Bangladesh factory collapse 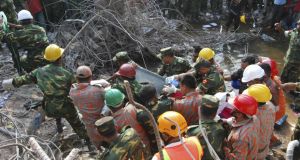 Rescuers carry a survivor out of the rubble of the Rana Plaza factory last May. Photograph: AP Photo/Parvez Ahmad Rony


Primark is to pay out a further $10 million in compensation to victims of the Rana Plaza factory collapse in Bangladesh weeks before the anniversary of the disaster in which more than 1,100 garment workers lost their lives.

The British retailer has agreed to pay $9 million to the 581 workers, or their families, from New Wave Bottoms, Primark’s supplier, which was based on the second floor of the building in Dhaka. A further $1 million will go into a communal compensation pot to be shared among all the 3,600 workers who suffered when the Rana Plaza complex collapsed in April 2013.

Both payments should be made under the auspices of a compensation scheme backed by UN agency the International Labour Organisation (ILO), under a deal agreed over the weekend.

Campaigners hope Primark’s payment will help persuade other retailers linked to the Rana Plaza building to pay up. The latest round of payouts will bring Primark’s total compensation bill to $12 million after it paid out $2 million in short-term support for all workers within the building.