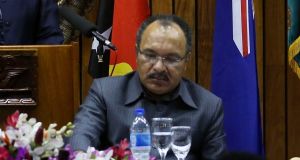 Papua New Guinea has reinstated the death penalty and repealed controversial sorcery laws after a string of gruesome “witch” killings and gang-rapes, with capital punishment to be used for some corruption cases and possibly even growing marijuana.

Papua New Guinea is one of the poorest and most corrupt countries in the world, with rampant graft a major hindrance to the South Pacific nation’s ability to develop vast reserves of natural resources.

The parliament voted yesterday to extend death penalty laws, unused since 1954, to make murder, rape and robbery punishable by measures ranging from hanging to a firing squad, as well as “medical death by deprivation of oxygen”.

The vote followed a spate of violent sorcery-related crimes, including murders and beheadings that have drawn condemnation from the United Nations.

In February, a 20-year-old mother was accused of witchcraft, then stripped and burned alive in a crowded market near Mount Hagen in the forbidding, jungle-clad central highlands.

However, rights watchdog Amnesty International condemned the reinstated laws as an “horrific and repressive” way to deal with crimes that had been largely committed against women.

“We are horrified that the government is attempting to end one form of violence by perpetuating state-sanctioned violence,” said Amnesty’s Asia-Pacific deputy-director Isabelle Arradon.

Police minister Nixon Duban said the government also wanted to apply the death penalty to producers of home-brewed alcohol, which is widespread, as well as marijuana growers because they also contributed to deteriorating law and order.

“People who produce homebrew and cultivate marijuana will be put to death. People who spy around on our mothers and young girls will be hanged or face firing squads. There are too many lawless people in the country. This will teach them a lesson,” Mr Duban told a meeting in Madang, The National newspaper said.

A 32-year-old US academic was gang-raped by a group of men as she walked with her husband in a forest on Karkar Island in Madang province last month, an attack condemned as a “cowardly act of animals” by prime minister Peter O’Neill.

Mr O’Neill is trying to lure multi-billion dollar resources investments with a promise of better security. The government said the new laws would extend the death penalty to include corruption and the theft of amounts of more than 10 million Papua New Guines Kina, or $4.5 million.

Lesser amounts of more than $438,000 would attract 50-year prison terms without possibility of remission or parole.

Sorcery laws repealed in 1971 had criminalised witchcraft and allowed suspicions of sorcery to be used as a defence in murder trials. The new laws will make revenge killings over black magic punishable by death.

Papua New Guinea, a nation of around 6.5 million people, is going through a resources boom and is home to a $15.7 billion Exxon Mobil gas export project, which is due to start production in 2014 and boost GDP by around 20 per cent.

There is also the vast Lihir gold mine operated by Newcrest Mining and the OK Tedi copper mine run by Glencore Xstrata.

But successive governments have been unable to deliver infrastructure or services to the people, around 80 per cent of whom eke out subsistence livings of cash crops on village farms.