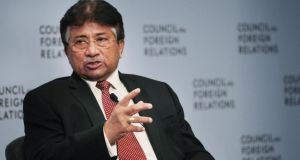 Former Pakistani president Pervez Musharraf ran from an Islamabad courtroom on Thursday after judges ordered his arrest, dealing a fresh blow to his fast-fading hopes of reviving his political career at next month’s general elections.

Musharraf’s hasty exit from the Islamabad high court symbolises the faded influence of a former army chief who once dominated Pakistan’s political landscape, but whose bid to stage a triumphal comeback has garnered scorn.

The order pushed Pakistan’s judiciary into uncharted territory, challenging a long-standing, unwritten rule that the top ranks of the army are untouchable.

Musharraf returned from self-imposed exile last month hoping to win a seat in the National Assembly next month.

But his arrival has placed him at the mercy of judges whose memories are still raw of a showdown in 2007 when he sacked the chief justice, placed colleagues under house arrest, and lawyers fought running battles with police. This week he was barred from standing for election, in part due to legal challenges he faces. – (Reuters)