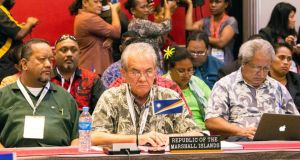 Pacific leaders have hit out at the insensitivity of an Australian minister’s apparent joke at the expense of low-lying nations struggling against rising sea levels.

Immigration minister, Peter Dutton, was caught on a microphone chatting with Australian prime minister, Tony Abbott, and social services minister, Scott Morrison, while waiting for a community roundtable to begin on Friday in Canberra.

Mr Dutton implied that meetings at the recent Pacific Islands Forum in Papua New Guinea had also begun late because: “Time doesn’t mean anything when you’re about to be, you know, have water lapping at your door.”

Mr Abbott laughed at the comment, until Mr Morrison pointed out that there was a live microphone hovering above their heads.

Marshall Islands foreign minister, Tony de Brum, who has been a high-profile advocate for stronger action on climate change in the UN climate process, expressed his offence on Twitter:

Anote Tong, the president of Kiribati, described the joke as vulgar. “What kind of a person is he?” he asked the ABC. “As long as there is this kind of attitude, this kind of arrogance in any position of leadership, we will continue to have a lot of tension.”

Gary Juffa, the governer of the PNG province of Ono, focused on the Australian prime minister’s reaction:

Mr De Brum has consistently said that even if the upcoming Paris climate talks keep the atmosphere within the (increasingly unlikely) target of a two degree temperature rise on pre-industrial levels, that his islands may become uninhabitable. He and other island leaders have said climate science gives them little chance in a world that warms more than 1.5 degrees.

The furore broke out just hours after the Australian prime minister rejected a plea from Pacific countries to ramp up its carbon-reduction targets, which observers called “pathetically inadequate” when they were released in August.

Earlier, Mr Tong told the ABC that Australia’s refusal to consider scaling up its ambitions was disappointing.

“I would really have loved to go back and say yes, we had support, solid support from all of the Pacific neighbours including our developed neighbours. How does it feel? I’ve learned to live with the disappointments,” he said.

It is not the first time Mr De Brum has used strong language to attack Australia. Earlier in the year he said the country had “jerked around” the Marshall Islands by cutting its foreign aid budget.

Mr Dutton has so far refused to comment on the incident.