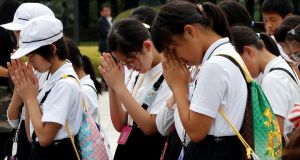 Students pray in front of the cenotaph for the victims of the 1945 atomic bombing, at Peace Memorial Park in Hiroshima. Photograph: Toru Hanai/Reuters

Barack Obama on Friday became the first sitting US. president to visit Hiroshima, site of the world’s first atomic bombing, a gesture Washington and Tokyo hope will showcase their alliance and breathe life into stalled efforts to abolish nuclear arms.

The visit has stirred debate, with critics accusing both sides of having selective memories, and pointing to paradoxes in policies relying on nuclear deterrence while calling for an end to atomic arms.

The two governments hope Obama’s tour of Hiroshima, where an atomic bomb dropped on August 6th, 1945, killed thousands instantly and some 140,000 by the year’s end, will highlight a new level of reconciliation and tighter ties between the former enemies.

Aides say Mr Obama’s main objective in Hiroshima, where he will lay a wreath at a peace memorial, is to showcase his nuclear disarmament agenda. He won the Nobel Peace Prize in 2009 for what many said were eloquent speeches on the topic.

Mr Obama has said he will honour all who died in World War Two when he visits Hiroshima, accompanied by Japanese prime minister Shinzo Abe, but will not apologise for the bombing of Hiroshima.

The city of Nagasaki was hit by a second nuclear bomb on August 9th, 1945, and Japan surrendered six days later.

A majority of Americans see the bombings as having been necessary to end the war and save lives, although some historians question that view. Most Japanese believe they were unjustified.

“I’m coming, first and foremost, to remember and honour the tens of millions of lives lost during the Second World War. Hiroshima reminds us that war, no matter the cause or countries involved, results in tremendous suffering and loss, especially for innocent civilians,” Mr Obama said in written responses to questions published in the Asahi newspaper on Friday.

The White House debated whether the time was right for Mr Obama to break a decades-old taboo on presidential visits to Hiroshima, especially in an election year.

But Mr Obama’s aides defused most negative reaction from military veterans groups by insisting he would not second-guess the decision to drop the bombs.

“I will not revisit the decision to use atomic weapons in Hiroshima and Nagasaki, but I will point out that prime minister Abe and I coming to Hiroshima together shows the world the possibility of reconciliation - that even former adversaries can become the strongest of allies,” Mr Obama told the Asahi.

Second world war flying ace Dean “Diz” Laird (95) who shot down Japanese fighters and dropped bombs on Tokyo, said he was pleased both that Mr Obama was going to Hiroshima and that he would offer no apology.

“It’s bad that so many people got killed in Hiroshima, but it was a necessity to end the war sooner,” said Mr Laird, the only known US Navy pilot to shoot down both German and Japanese planes during the war.

“I believe in at least showing the Japanese that we care because they are now our good allies.”

Mr Laird suggested the time was past when Japan had to keep atoning for its wartime history: “There were a lot of atrocities but that war is over.”

Critics argue that by not apologising, Mr Obama will allow Japan to stick to the narrative that paints it as a victim.

Mr Abe’s government has affirmed past official apologies over the war but said future generations should not be burdened by the sins of their forebears.

“Given Hiroshima’s sensitive identity, the Japanese government is trying to use the historic visit to highlight Japan’s image of a ‘war victim’, while downplaying its role as an aggressor in World War Two,” China’s state news agency Xinhua said. “... Obama’s Hiroshima visit should not be used as an occasion to whitewash Japan’s atrocities in World War Two.”

Atomic bomb survivors have said an apology from Mr Obama would be welcome but their priority is ridding the world of nuclear arms, a goal that seems as elusive as ever. Some also worried insistence on an apology would keep Mr Obama from visiting at all.

“We’re still 10 years from the possibility of a (US) president issuing an apology,” said Kenji Ishida, a 68-year-old Hiroshima resident and taxi driver who was born two years after the bomb was dropped on Hiroshima.

“Japan has to apologise for Pearl Harbour, too, if we’re going to say the US must apologise,” he said.

Anti-nuclear activists hope Mr Obama’s visit will breathe life into a stalled process while critics argue the president has made scant progress and is spending heavily to modernise the US atomic arsenal. Japan, despite advocating disarmament, relies on the US nuclear umbrella for extended deterrence.