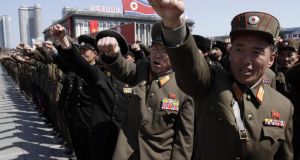 North Korea stepped up its warlike rhetoric at the weekend, declaring that the Korean peninsula was in a “state of war” and saying that its nuclear weapons were “the life of the nation” to be treasured at all cost.

“From this moment, North- South relations will be put at a state of war, and all the issues arising between the two will be dealt with in accordance to wartime regulations,” the North’s official KCNA news agency indicated in a statement on Saturday.

The two Koreas remain technically at war as the 1950-53 Korean War ended in a truce rather than a peace treaty.

The sabre-rattling and warlike rhetoric is a sign of Pyongyang’s anger over a fresh round of economic sanctions following its third nuclear weapons test on February 12th.

The North Koreans are also angry about annual US-South Korean military drills. Last week, two B-2 stealth bombers dropped dummy munitions on an uninhabited South Korean island as part of the drills, which are decried in the North as rehearsals for invasion.


Direct talks
Most analysts agree that a full- scale North Korean attack is unlikely, although fears of a local skirmish have intensified.

The threats are most likely aimed at encouraging the new government in Seoul to moderate its attitude to their North Korean neighbours and also help push the North’s long- sought for call for direct talks with the US.

Domestically, it probably also helps shore up the position of young leader Kim Jong-un, who is said to be balancing pressure from the military and other interest groups to keep a grip on power.

The North said it reserved the right to react to any provocation hurting its dignity with “resolute and merciless physical actions without any prior notice” and mentioned specific targets such as the US mainland, Hawaii and Guam, as well as 28,500 American troops stationed on the peninsula.

The statement went on to say the South Korean presidential residence of Cheong Wa Dae, or the Blue House, and its military bases would be attacked.

There was more robust rhetoric yesterday in a statement following a plenary meeting of the central committee of the ruling Workers Party, over which Mr Kim presided.

North Korea’s “nuclear armed forces represent the nation’s life, which can never be abandoned as long as the imperialists and nuclear threats exist on earth,” the statement ran, and would not be traded even for “billions of dollars”.

“are neither a political bargaining chip nor a thing for economic dealings to be presented to the place of dialogue or be put on the table of negotiations aimed at forcing [Pyongyang] to disarm itself”, it said.

The statement said the North had “adopted a new strategy of carrying out economic construction and building nuclear armed forces simultaneously”.

The North has also said it would shutter the inter-Korean industrial complex in its border city of Gaeseong should its “dignity” be threatened.

The complex, where 123 South Korean companies run factories with cheap North Korean labour, is a major source of hard currency for the impoverished communist country.

The United Nations reckons that about two-thirds of the country’s 24 million people face regular food shortages.

The Seoul government said there was nothing in the North’s latest statement to cause particular alarm.

In Seoul the reaction was calm.

“North Korea’s statement . . . is not a new threat but is the continuation of provocative threats,” said South Korea’s unification ministry, which deals with matters relating to the North.

However, some of the more hawkish members of South Korea’s ruling Saenuri Party have called for a tougher stance on the North.


Nuclear capability
“The question is, for South Koreans, can we live peacefully with a nuclear-armed North Korea?

” said parliamentarian Chung Mong-joon in a recent interview with CNN. “The answer is No. Nuclear deterrence can be the only answer. We have to have nuclear capability.”

The US said it was keeping an eye on the situation.

“We take these threats seriously and remain in close contact with our South Korean allies,” said Caitlin Hayden, spokeswoman for the National Security Council.

Huh Moon-young, a fellow at the state-run Korea Institute for National Unification, told the Korea Herald that Seoul and Pyongyang should avoid tensions escalating further.

“It [Seoul] needs to make a rationale for Pyongyang to come forward for dialogue and help the dovish forces within the North Korean regime to raise their voices,” he said.

“During such a period of heightened inter-Korean tensions, the voices of those favouring dialogue in both Seoul and Pyongyang are sacrificed.”