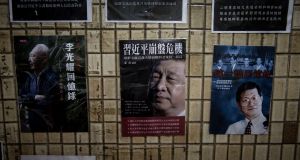 Posters of books about China’s politics including - some featuring Chinese president Xi Jinping - are displayed in the staircase leading to a bookshop in Hong Kong. Photograph: Philippe Lopez/AFP/Getty Images

The wife of one of the five missing Hong Kong booksellers has withdrawn a missing person’s report, saying her husband was fine and helping with an inquiry in mainland China.

Her comments further cloud a mystery that has raised fears of a threat to the territory’s autonomy.

In a handwritten letter faxed to the Causeway Bay Bookstore where he worked, Lee Bo, otherwise known as Paul Lee, apparently wrote that he was handing “urgent matters … that aren’t to be revealed to the public”.

The letter added: “I have made my own way back to the mainland in order to cooperate with the investigation by relevant parties.

“It might take a bit of time,” it said. “My current situation is very well. All is normal.”

A photo of the handwritten letter was first published by Taiwan’s government-affiliated Central News Agency late on Monday.

Activists believe Mr Lee was forced to write the fax, but the Global Times newspaper, which is part of the group that publishes the Communist Party’s official organ, People’s Daily, said speculationMr Lee wrote the document under coercion was “ideologically biased”. It accused the Hong Kong media of “maliciously” stirring up conflict.

“Causeway Bay Books almost only publishes and sells mainland-related political books, many of which contain maliciously fabricated content … the bookstore is as matter of fact surviving by creating trouble for the mainland,” it said.

“Whoever maliciously stirs up conflict will offend the entire country, and betray Hong Kong’s fundamental interests,” the newspaper said.

There are fears in Hong Kong that mainland security agents abducted the bookstore owner and took him across the border last Wednesday in a rendition-style action, as he reportedly did not have his travel permit for mainland China with him.

The disappearances of the five booksellers chime with growing fears that Beijing is chipping away at the “one country, two systems” principle put in place after Hong Kong reverted to Chinese rule in 1997, giving the territory a high degree of autonomy and civil rights including a free press, rights not permitted in mainland China.

Beijing’s patience with freewheeling Hong Kong has been tested in recent years, especially after the Occupy Central pro-democracy movement took over major intersections late in 2014.

There has been speculation in Hong Kong that the publisher planned to publish a salacious book about the early love life of President Xi Jinping.

Mr Lee is the fifth man linked to the Mighty Currents publishing house, which owns the Causeway Bay Bookstore and specialises in literature critical of China’s government, to be reported missing since October.

Police said they had ceased the search for Mr Lee but were continuing their search for the other four booksellers.