Estimates suggest 43,000 in Bangladesh die each year from arsenic-related diseases 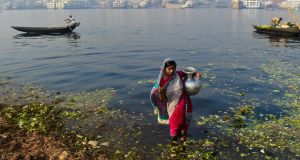 Nearly 20 million Bangladeshis are still drinking water poisoned with high levels of arsenic despite millions of wells being tested and hundreds of thousands of safe ones having been bored to avert a major health crisis, a new report has suggested.

The lack of progress in improving what the UN’s World Health Organisation called “the largest mass poisoning of a population in history” in the 1990s is blamed on government nepotism, rich country neglect and NGOs losing sight of the problem, says Human Rights Watch.

Latest estimates suggest 43,000 in Bangladesh die each year from arsenic-related diseases. These include skin lesions, cancers, and cardiovascular and lung illnesses.

According to the government, 5 million village wells were tested between 2000-03, with pumps painted red or green according to whether they were safe or unsafe. In 2003, an estimated 20 million drank arsenic-laced water.

However, says the report, all urgency to address the problem has disappeared and the rate of contamination is now much the same as it was in 2003. Recent studies have found 20 million are still exposed to unsafe levels of arsenic contamination.

According to Human Rights Watch , some politicians are awarding safe wells to their supporters and allies instead of giving them to the people in rural areas who most need them, and there is little testing or monitoring of vulnerable communities.

“Bangladesh isn’t taking basic, obvious steps to get arsenic out of the drinking water of millions of its rural poor. The government acts as though the problem has been mostly solved, but unless the government and Bangladesh’s international donors do more millions of Bangladeshis will die from preventable arsenic-related diseases,” said Human Rights Watch researcher Richard Pearshouse.

“Progress reviews mostly involve counting the number of safe water devices installed by the government, international donors and NGOs, then multiplying those totals by a hypothetical number of optimal users for different water points,” he said.

Arsenic water contamination is endemic across Asia, with India, China, Vietnam and Cambodia all experiencing problems . Scientists say it originated thousands of years ago when rocks rich in arsenic were eroded from the Himalayas and deposited in low-lying areas by a natural chemical process.

Yet it was the best intentions of governments and world bodies in the 1970s to improve health that led to the crisis in Bangladesh. Until the 1980s most villagers drew water from shallow wells, or collected it from ponds and rivers – and regularly suffered cholera, dysentery and other water-borne diseases.

In response to these preventable illnesses the UN and many western donors advised Bangladesh to bore deeper “tube wells” into the underground water aquifers to draw clean, pathogen-free water. However the scientists and donors advised drilling to about 150ft – almost precisely the depth of arsenic-rich rock.

The first cases of arsenic poisoning were discovered in the early 1990s, and, in 1995, an international conference in Kolkata, India, drew the world’s attention to the problem. From 1999 to 2006, the government, international donors and NGOs spent hundreds of millions of pounds to mitigate the contamination. The World Bank funded the installation of approximately 13,000 rural wells from 2004 to 2010. – Guardian service