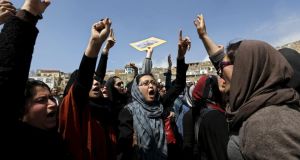 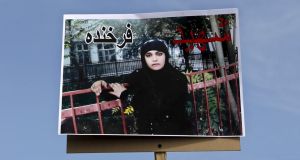 A poster bearing a picture of Farkhunda, an Afghan woman who was beaten to death and set on fire on Thursday, during her funeral ceremony in Kabul on March 22, 2015. Photograph: Mohammad Ismail/Reuters 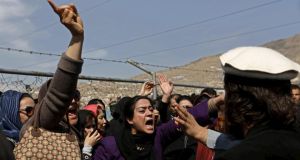 Afghan women’s rights activists chant slogans during the funeral ceremony of Farkhunda, an Afghan woman who was beaten to death and set alight on Thursday, in Kabul, March 22, 2015. Photograph: Mohammad Ismail/Reuters 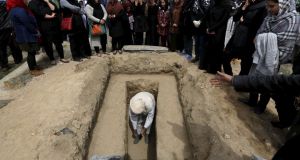 A man prepares for the burial of Farkhunda. Photograph: Mohammad Ismail/Reuters 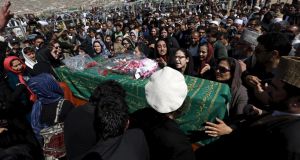 Afghan women’s rights activists carry the coffin of Farkhunda during her funeral in Kabul on March 22, 2015. Photograph: Mohammad Ismail/Reuters 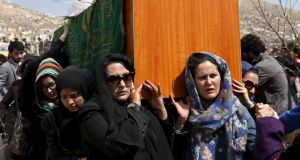 Farkhunda’s coffin is borne by women before her burial. Photograph: Mohammad Ismail/Reuters 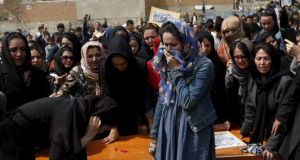 A picture of grief in Kabul. Photograph: Mohammad Ismail/Reuters

A woman killed by an angry mob in front of police in the Afghan capital last week for allegedly burning a copy of Islam’s holy book was wrongly accused, Afghanistan’s top criminal investigator said on Sunday.

Mobile phone footage circulating on social media shows police at the scene did not act to save the 27-year-old woman, known as Farkhunda, who was beaten with sticks and set on fire by a crowd of men in central Kabul in broad daylight on Thursday.

“Last night I went through all documents and evidence once again, but I couldn’t find any evidence to say Farkhunda burnt the Holy Koran,” Gen Mohammad Zahir told reporters at her funeral on Sunday. “Farkhunda was totally innocent.”

The investigator promised to punish all those involved and said 13 people, including eight police officers, had already been arrested.

The killing was condemned by the Afghan president and other officials, but also drew praise from some quarters, including from a prominent cleric, who asserted the men had a right to defend their Muslim beliefs at all costs.

Farkhunda was a teacher of Islamic studies, according to her brother, who denied media reports that she had been mentally ill.

He said this was a made-up defence by their father, who wanted to protect the family after police told them to leave the city for their own safety.

“My father was frightened and made the false statement to calm people down,” said Najibullah, who said he was changing his second name to Farkhunda in memory of his sister.

Hundreds of people attended her funeral on Sunday chanting “we want justice”, and her coffin was carried by women.

The US and other countries have spent millions of dollars in Afghanistan on promoting the rule of law, justice and women’s rights since the Taliban were ousted in 2001.

Under the strict Islamist rule of the Taliban, women could neither attend school nor work, and were forbidden from leaving the house without a male guardian.

The last decade has seen much progress. Millions of girls now attend school and women can enter employment, particularly in major cities.

But in some rural areas, little has changed and hard-won rights are at risk of being reversed as aid and foreign troops are withdrawn.