‘Do you think if they behead you, you cook them sweets?’ 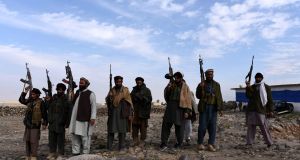 Local village militia members loyal to a powerful Afghan lawmaker beheaded four Islamic State fighters and placed their severed heads on the side of a main road in eastern Afghanistan, local officials said on Sunday.

The killings in Achin district of the eastern province of Nangarhar highlighted the increasingly brutal violence of the fight between Islamic State and rival groups, ranging from local militias to the Taliban.

Islamic State has made inroads in several districts of the province as they try to build strength and replace the hardline Taliban insurgents.

Dozens of members of a local militia force loyal to Haji Zahir, deputy speaker of parliament, have been battling both Taliban and Islamic State militants in the district for weeks.

Islamic State militants first captured four fighters from the militia, known as Pasoon or “Uprising” and beheaded them. The militias then retaliated, Zahir told reporters. “Do you think if they behead you, you cook them sweets?” Zahir asked.

Ataullah Khoqani, spokesman for the provincial governor said Afghan government forces were not involved in the incident, adding that the incident is being investigated.

In a sign of the growing reach of Islamic State, militants have taken to the airwaves in a radio show called “Voice of the Caliphate” in Nangarhar to win recruits among young Afghans.

Islamic State is relatively a new force in Afghanistan and there is some dispute about how strong it is, how many members it commands and how closely they are linked operationally to the movement’s main arm in Iraq and Syria.

Last week, the commander of international forces in the country, US General John Campbell, said there were between 1,000 to 3,000 members of the movement in Afghanistan and he said its influence would spread if left unchecked.