Letter from Nepal: it is the women who suffered most 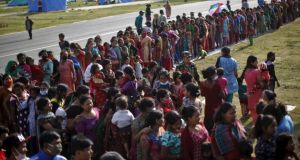 Earthquake victims line up during a food and water distribution at a camp for displaced people, in Kathmandu, Nepal. Photograph: Adnan Abidi/Reuters 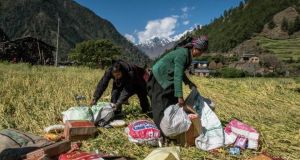 Nepalese villagers collect aid dropped by an Indian military helicopter during a joint relief and rescue mission with the Nepalese military in the Gorkha district of Nepal. Photograph: Daniel Berehulak/The New York Times

It took a day for Bhoj Kumar Thapamagar, a soldier in the Nepalese army, to make a frantic 290km journey from a military training camp back to the destroyed village of Paslang, where his wife, Susmila Thapamagar, eight months pregnant with their second child, died saving their five-year-old daughter during the earthquake.

“She was sweeping the floor inside our home. Our daughter was outside the house – she would do the same things her mother did, copying her. When the earthquake struck Susmila fell and the house crushed her, pushing my daughter out of the way. She was about to give birth in the middle of May, a son,” says Thapamagar (29).

The collapsing wall killed a neighbour’s infant son, and villagers spoke of how she tried to shield the child as she fell.

Travelling through the shattered villages of Gorkha district, beneath the stunning peaks of the Ganesh Himal mountain range, a pattern starts to emerge of how many more women than men were directly affected by the quake.

Beneath his “I love Nepal” baseball cap, Thapamagar seems shell-shocked. He desperately wants to begin the official programme of 13 days of mourning under Hindu ritual for his wife, but there is no time when the needs of the living are so pressing.

His daughter is in hospital with 13 stitches in her head. Nearly all of the 55 houses of Paslang are wrecked.

As he talks to us, relief finally begins to arrive in the form of hygiene packs in this village of 300 people. As they are handed out by the emergency response team of Care International, there is some applause, but not too much.

While the men worked the fields, or did their jobs in Kathmandu or further afield, it was the women who were inside the often poorly built houses when the 7.8 magnitude earthquake struck Nepal on April 25th, killing more than 7,500.

Most of the migrant workers providing the remittances that make up a third of Nepal’s economy are men, who had to watch from afar as loved ones bore the brunt of the disaster.

Many of the men in Paslang join the army, because during the civil war, if you didn’t join the military you might be considered a Maoist. And if you died as a Maoist, you didn’t get a pension, whereas soldiers’ families are looked after.

Down the street, it’s the same story. Raj Kumar Sahi and his son Sujan were in Kathmandu when the quake struck. In the capital, Raj is a security guard and Sujan is a soldier, work they do to subsidise their farm in Paslang.

“I was in the fields working but the women were at home in the house,” is a regular refrain, and in every town, it is the women wearing the bandages and who suffered most.

It appears that more than half of the casualties of the quake, which struck at 11.56am, were women.

Similar patterns were seen during the Asian tsunami in 2003, especially in Aceh in Indonesia, and in the earthquake in Pakistan in 2005. New mothers and pregnant women are particularly vulnerable. And the end of the quake does not mean the end to the threat to women.

According to UN Women, violence, particularly gender-based violence, often increases during emergencies. This is especially true in patriarchal societies. The likelihood of rape and sexual exploitation increases during natural disasters, and there are fears human traffickers will use the chaos following the quake to target women for brothels in India or in Kathmandu.

Gauri is 85, and she was alive for the first earthquake in 1934. She doesn’t quite remember it, but she has been told about it. Asked if she is the oldest woman in the village, she says: “Oh yes!” There is one older man, but his faculties are gone.

Her son Jun proudly says how she still works and runs the family. As if to prove it, Gaudi gets up from the step and swiftly descends the broken stairs etched into the hillside to the chicken coop with astonishing sure-footedness.