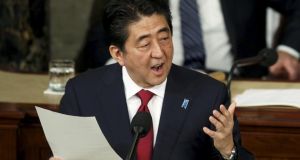 Prime minister Shinzo Abe expressed “deep repentance” over Japan’s role in the second World War in a speech to the US Congress on Wednesday, even as he declared Tokyo’s emergence as a global security player in the face of China’s rising power.

Using the platform to strike a note of measured contrition, Mr Abe insisted that Japan must not avert its eyes from the suffering of Asian peoples from its wartime behaviour but stopped short of issuing his own apology, instead upholding statements by his predecessors.

Mr Abe’s comments on Japan’s war record drew criticism from some US politicians who hoped he would go further and were also unlikely to satisfy critics in South Korea and China, where he is accused of trying to whitewash history.

But the conservative premier chose to focus his landmark speech more on the future of the US-Japan military alliance and press skeptical lawmakers to back a Pacific trade pact.

“We now hold high a new banner that is a ‘proactive contribution to peace based on the principle of international cooperation’,” Mr Abe said a day after he and president Barack Obama cemented new guidelines for Japan’s military to support US forces beyond its waters. He has proposed reforms to Japan’s pacifist post-war constitution to make this possible.

Receiving a warm welcome reflecting Japan’s status as America’s staunchest Asian ally, Mr Abe, the first Japanese prime minister to address a joint meeting of Congress, sent a stern message to China, which is locked in maritime disputes with Tokyo and other Asian neighbors.

Though he did not mention China by name, he spoke of the “state of Asian waters,” saying countries must not “use force or coercion to drive their claims.”

Mr Abe’s speech was a moment symbolic of the reconciliation between former second World War enemies who are now the closest of allies. He spoke in slow, deliberate English and was interrupted frequently by applause and standing ovations.

Mr Abe gave his address from the spot where president Franklin Roosevelt asked for a declaration of war against Imperial Japan after the 1941 bombing of Pearl Harbor in Hawaii. The speech also coincided with Japan’s national holiday marking the birthday of its wartime emperor, Hirohito.

Mr Abe, who has sought to cast Japan’s aggressive second World War-era conduct with a less apologetic tone, was under close scrutiny for how he chose to handle history in his speech.

The issue remains a sensitive one for Asian neighbours, especially China and US ally South Korea, nearly 70 years after Japan’s defeat.

Some American critics had urged Mr Abe to make a strong expression of contrition about second World War aggression to erase concerns that he is trying to dilute past official statements. But his domestic allies feel fresh apologies are unneeded.

Mr Abe did in fact offer a new rhetorical twist when he spoke of his visit to Washington’s second World War memorial, saying: “With deep repentance in my heart, I stood there in silent prayers.”

But he stuck mostly to his past language, expressing “deep remorse” for Japan’s wartime conduct and saying he upheld previous Japanese apologies, including a 1995 landmark statement by then-premier Tomiichi Murayama.

Mr Abe made no mention of “comfort women,” the Japanese euphemism for thousands of Korean and other Asian women forced into prostitution at Japanese military brothels in the second World War. But in a possible oblique reference, he said “armed conflicts have always made women suffer the most.”