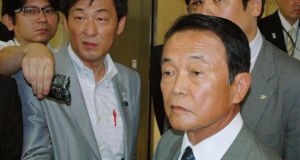 Japan’s deputy prime minister Taro Aso has swatted away demands that he quit after suggesting his government should learn from Nazi Germany.

In an apparent attempt to stamp out the diplomatic fires started by his deputy, however, prime minister Shinzo Abe says he will stay away from a controversial shrine to Japan’s war dead this month.

Mr Aso told a conservative audience earlier this week that Japanese politicians should study how the Nazis quietly rewrote the 1919 charter of the Weimer Republic.

“Germany’s Weimar Constitution was changed before anyone noticed,” said Mr Aso, who also serves as finance minister. “Why don’t we learn from that technique.”

Japan’s government wants to revise the 1946 pacifist constitution, banning the maintenance of a conventional military. Written under the post-war US occupation, the constitution has long been unpopular with nationalists.

The government has been frustrated, however, by opposition from the public and criticism from abroad. Coalition partner New Komeito, a Buddhist-backed party, also rejects changing the pacifist clause.

Uproar at home
Mr Aso’s remarks have caused uproar in Japan, with several leading politicians calling for him to resign. The secretary general of the opposition Democratic Party, Akihiro Ohata, called them “totally incomprehensible”.

South Korea and China have seized on the remarks as another sign of Japan’s political drift to the right. “It is clear what such comments on the [Nazi] regime mean to people of the time and to those who suffered from Japan’s imperialistic invasion,” said South Korean foreign ministry spokesman Cho Tai-young this week.

Mr Aso insisted yesterday the remarks were taken out of context and said he was only trying to encourage what he called “calm debate” about constitutional change. “I have no intention to step down,” he said yesterday.

But in a move likely to be seen as a concession to Beijing and Seoul, Mr Abe has decided not to visit Yasukuni Shrine on August 15th, the anniversary of Japan’s surrender in the second World War, according to media reports.

Political visits to Yasukuni, which enshrines Japan’s top war criminals along with about 2.5 million soldiers, invariably trigger accusations across Asia that Tokyo has failed to atone for the war. Mr Abe made a pilgrimage to the shrine last year before he became prime minister and has repeatedly defended the visits. His decision to not go will anger his conservative supporters.

Ties with Beijing and Seoul have been corroded by territorial disputes and differences over interpretations of the war. Mr Abe enraged both countries last month when he dodged a question about whether Japan has launched a war of aggression and colonisation.

This week’s controversy again emphasises the potential for wartime disputes to disrupt or even bring down Mr Abe’s government. The prime minister has insisted he learned his lesson from his first stint as Japan’s leader in 2006/7 when he triggered a bitter international row over so-called comfort women, or wartime sex slaves.

Mr Abe has repeatedly expressed doubt about Japan’s role in rounding up the women.

1 Covid-19: Cabinet looks to tighten travel restrictions and decide on pubs reopening
2 Five Covid-19 clusters found among Irish fruit and vegetable growers
3 David Trimble: After the big dinner in Oslo, somebody said why don’t we party together?
4 Seamus Mallon: I saw John Hume’s raw courage as he faced troop of bloodthirsty Paras
5 Cholesterol-lowering drugs may not have much benefit, review finds
Real news has value SUBSCRIBE